And to Think That I Saw It on Mulberry Street, originally titled A Story That No One Can Beat, is the first book by Dr. Seuss, published in 1937 by chance, after Seuss nearly burned the manuscript in defeat following an alleged 27 publishing house rejections, but happened to run into an editor friend, Mike McClintock. It centers on themes of childhood imagination and how whimsical behavior is stifled by adult society, following the protagonist Marco as he concocts an elaborate scene out of a horse-drawn cart so he will have something to tell Dad, the unseen antagonist, when he gets home from school.

Dad, at the beginning of the story:

The narrator of the book, a young boy who encounters a horse and cart on the way home from school. He has a history of run-ins with Dad for telling wild stories. He is particularly upset by this conflict, and it takes the duration of the story for his dynamic change to shape him into a more honest and humble individual.

Marco's stern father. He's very suspicious and finds his son's eyesight "too keen," claiming he should see the world as it really is, and not what he dreams it to be. It is unknown what his reactions would be when Marco told him that he just saw a plain horse and wagon on Mulberry Street.

The lead policeman whom Marco imagines leading the elephant-drawn brass band with his squadron to avoid oncoming traffic from the perpendicular Bliss Street.

The Mayor and Alderman

Two important town leaders and spectators of the parade Marco dreams up, said to be waving red, white, and blue patriotic flags. Allegedly the mayor is a facsimile of Fordis C. Parker, the 38th mayor of Geisel's hometown, Springfield, Massachusetts.

Marco's peers. They are mentioned in passing, and it can be assumed that the protagonist thinks of them as intellectually inferior.

The story begins as a boy named Marco walks home from school, thinking of his father's advice: "Marco, keep your eyelids up/ And see what you can see." However, the only thing Marco has seen on his walk is a horse pulling a wagon on Mulberry Street. To make his story more interesting, Marco imagines progressively more elaborate scenes based around the horse and wagon. He imagines the horse is first a zebra, then a reindeer, then an elephant, and finally an elephant helped by two giraffes. The wagon changes to a chariot, then a sled, then a cart holding a brass band.

Marco's realization that Mulberry Street intersects with Bliss Street leads him to imagine a group of police escorts. The scene becomes a parade, as he then imagines a grand stand filled with the mayor and aldermen; an airplane dropping confetti; and, in the final incarnation of the scene, a Chinese man, a magician pulling rabbits out of a hat, and a man with a ten-foot beard. Now almost home, he snaps back to reality and rushes up the front steps, eager to tell his father his imagined story. However, when his father questions him about what he saw on his way home, his face turns red and he says, "Nothing ... but a plain horse and wagon on Mulberry Street."

The book was first published in 1937 by Vanguard Press, unlike later Seuss books, which were published by Random House.

You can listen to the audio-book here: https://www.youtube.com/watch?v=A0Ndx5Reh_g 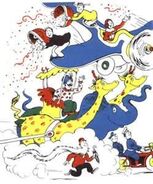 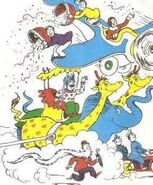 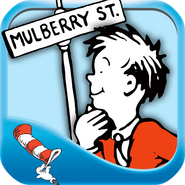 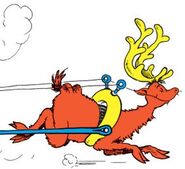 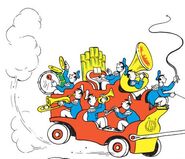 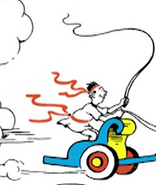 Retrieved from "https://seuss.fandom.com/wiki/And_to_Think_That_I_Saw_It_on_Mulberry_Street?oldid=29663"
Community content is available under CC-BY-SA unless otherwise noted.