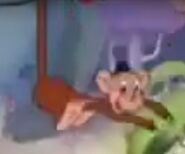 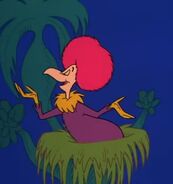 Add a photo to this gallery
1/2
Add photo

The Animals of the forest were Horton's friends, he laughed at him for hatching an egg, then they ran away leaving Horton behind, at the end of the book, they reunited with Horton and his new son Morton. In Dr. Seuss’ Horton Hears a Who! (film), the animals were rallied by Jane Kangaroo into fighting Horton, saying that his goal will lead to anarchy. Upon cornering him, the Kangaroo offers Horton a final chance to renounce Whoville's existence. Horton refuses and, despite the heartfelt speech that he gives, the Kangaroo orders the animals to rope and cage him, and to have the speck and Whoville destroyed in a pot of beezlenut oil. The Mayor enlists all of his people to make noise by shouting "We are here!", as well as playing a variety of instruments, so that all the animals may hear them, assisted by JoJo's "Symphonophone", an invention which creates a huge musical contribution and reveals that JoJo's "true" passion is music, but still fails to penetrate the surface of the speck.

As The Kangaroo snatches the flower from the weakened and captured Horton and prepares to drop it into the pot. Meanwhile, JoJo grabs the horn used to project Horton's voice, runs up the highest tower, and screams "YOPP!", breaking through the sound barrier just seconds before the speck hits the oil. Rudy, the Kangaroo's son, grabs the flower and proclaims he can hear it, and the other animals of Nool notice that they can hear it too. Despite his mother's objections, Rudy returns the flower to the released and recovered Horton. Realizing the truth about the Whos' existence, the animals isolate the Kangaroo for deceiving them. While being praised for his integrity by his neighbors, Horton forgives the devastated and regretful Kangaroo, who befriends him with a makeshift umbrella for Whoville. The film ends with the Whos and the animals of Nool gathering to recite the chorus from "Can't Fight This Feeling" by REO Speedwagon

Jungle animals in Horton Hears a who

Retrieved from "https://seuss.fandom.com/wiki/Animals_of_the_forrest?oldid=44308"
Community content is available under CC-BY-SA unless otherwise noted.