Anteaters are animals from "The Cat in the Hat Knows a Lot About That".

There are three types of anteaters:

Giant Anteater: Gray with a black stripe on the neck.

Tamandua: Yellowish white with a black stripe on the shoulders, back, and neck.

Anteaters have no teeth, but they have 2-foot long tongues for eating 30,000 ants and termites a day. Anteaters walk on their knuckles to keep their claws sharp for digging into anthills and termite nests. Anteaters can carry their young on their backs until the young are old enough to take care of themselves. Silky Anteaters, Tamanduas, and Giant Anteaters are found only in South America.

A Giant Anteater carrying her baby on her back

A silky anteater in defensive posture

A tamandua in defensive posture

A silky anteater carrying her baby on her back 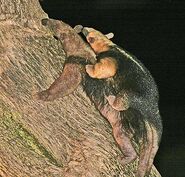 A Tamandua carrying her young

A silky anteater hanging on a branch

A Tamandua feasting on Ants
Add a photo to this gallery

Gallery of Anteaters from the Franchise

A giant anteater snuffling for ants
Add a photo to this gallery
Retrieved from "https://seuss.fandom.com/wiki/Anteater?oldid=37840"
Community content is available under CC-BY-SA unless otherwise noted.