Bartholomew Cubbins is a resident of the Kingdom of Didd. He appeared in The Wubbulous World of Dr. Seuss. He lives somewhere in the cranberry bogs.

Bartholomew Cubbins set out from his home to sell berries in town markets when he is interrupted by the royal procession in the central streets. Citizens are ordered to remove their hats out of respect for the oncoming King Derwin, which Bartholomew does. However, the King suddenly stops and commands Bartholomew to remove his hat again! Indeed, another hat has appeared there, and each time he removes one hat, its identical twin appears on his head.

On Derwin's orders, the Captain is brought Cubbins to the Throne Room, where he would be dealt with later. There he meets Sir Alaric, Keeper of the Records, who counts the number of discarded hats. The King orders Sir Snipps, 'maker of hats for all the fine lords.' Snipps appears and scoffs at Bartholomew's plain hat, yet, when he knocks it to the floor, another one appears. He leaves the room running.

The King's nephew, the proud Grand Duke Wilfred, called from outside the balcony window, meaning to try removing the hat. Bartholomew was brought to the Duke, who proceeds to shoot off his hads in succession with a child's bow, to no avail. The King believed then that the failure was due to the use of such a small weapon, so he called in the fierce Yeoman of the Bowmen and his mighty bow, with arrows "twice as long as Bartholomew, and thicker than his wrist."

A bow was shot and carried the hat hundreds of feet. But still a new hat takes its place. The Court decided that this can only be an act of black magic, and so calls in the seven magicians and their cats. They chanted a spell that would not succeed for a decade, infuriating the already impatient King. At his nephew's suggestion, he sent Bartholomew to execution.

Bartholomew, afraid of his fate, tried to rip off hats on his way to the Executioner's chamber, but more appear. At hat number 233, he reached the bottom and must face his death. The Executioner, who was reluctant to behead him, claimed that he cannot carry out a death sentence if a prisoner has their hat on.

So it's back upstairs for Bartholomew. The Grand Duke is in a rage, and so declares he should be taken to the tallest turret and pushed off. They march the prisoner up the stairs as he continues to drop hats. Just then, Sir Alaric calls to the King. Hat 451 was not a replica like the previous hats, but had two feathers instead. With each hat Bartholomew continues to drop, the extravagance grows until the pinnacle five hundredth hat was reached, a marvelous cap with a large ruby and plumes of all kinds of birds.

Wilfred still wants to push Bartholomew off the tower, but is reprimanded by the King, who is now interested in buying the magnificent hat. He offers 500 pieces of gold, one for each fallen hat. And alas, when Bartholomew removes his hat, this is the last, and his head is finally bare.

Arm in arm, the two of them marched to the counting room, where Bartholomew received his pay and the King his new hat, which, like all 499 other hats, he decided to keep in crystal cases. Bartholomew went home with a bag of money for his family, safe and sound. 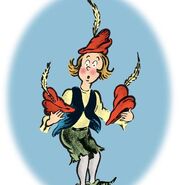 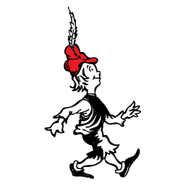 Add a photo to this gallery
Retrieved from "https://seuss.fandom.com/wiki/Bartholomew_Cubbins?oldid=43212"
Community content is available under CC-BY-SA unless otherwise noted.