Bartholomew and the Oobleck is a book written by Dr. Seuss and is good reading material for all ages.

The story begins with how everyone in the Kingdom of Didd still talks about the year the King got grumpy with the sky and how it would've been destroyed had it not for Bartholomew Cubbins. Bartholomew, who by this time has been employed as the royal page boy, is used to old King Derwin's grumpiness by now, but doesn't know what to think when he starts growling at everything that falls from the sky, be it rain, sunshine or fog. Then, in the winter, when the snow falls down, the King starts ranting about how sick he is of all those things, and wants something new to come down. Bartholomew tries to tell him it won't happen, as kings can't rule the sky, but the King insists that he can, and spends several days trying to find a way.

One night, just as the King is preparing for bed, he gets an idea: to have the royal magicians make something new to come down from the sky. He tells Bartholomew to summon them, but he objects at first, as the royal magicians frighten him, but reluctantly does so after the King commands it. After they are summoned, the King tells them his wish, and they agree to make something called "oobleck". When King Derwin asks what it is, they only chant:

That's all we know.

We just can't tell you anymore.

We've never made oobleck before.

Bartholomew, still nervous of the magicians, begs the King to stop them, but he is too excited about the whole thing to care, or even sleep. That night, Bartholomew watches the magicians as they go to their hideout on Mount Neeka-Tave and work their magic. That morning, Bartholomew smiles, confident that nothing has happened, but soon sees a green cloud emerge from the mountain. A minute later, tiny blobs of oobleck fall from the sky. Bartholomew tries to touch one, but soon draws his hand back, sensing something wrong with it. He wakes the King, who is overjoyed to see the now peanut-sized oobleck. He orders Bartholomew to ring the castle bell, as he plans to proclaim a royal holiday. Though he fears the oobleck is dangerous, he does as ordered, and runs to the bell tower.

Bartholomew wakes the royal bell-ringer, and tells him to ring the bell. The old man tries twice to ring the bell, but nothing happens. When he opens the window to investigate, he sees the oobleck has gummed up the bell, and it can't ring. Bartholomew also sees that it has also stuck a mother robin to her nest. Realizing that the oobleck will also stick people, he runs to the royal trumpeter's room, shoves his trumpet into his hands, and yells for him to blow an alarm. The trumpeter is, at first, confused, but after seeing the oobleck (which, by this time, has grown to cupcake size), he goes to the window to blow his trumpet. Unfortunately, an oobleck blob clogs it up, and he gets his hand stuck trying to pull it out. Bartholomew goes to the Captain of the Guard, but he is not afraid of the now baseball-sized oobleck. To prove it's safe, he scoops some of it up, and eats it, despite the page boy's warnings. As a result, his mouth becomes glued tight, and he can only blow bubbles to communicate. Bartholomew then decides to warn the kingdom himself, but as soon as he gets outside, it's already too late. The now football-sized oobleck is sticking up farmers and farm animals, so he ducks back inside.

Unfortunately, moments later, the oobleck has grown so big, it begins to ooze into the palace. Bartholomew runs through the palace and warns everyone to hide in their rooms, but everyone panics instead. Everywhere he goes, Bartholomew finds someone stuck to something. In no time at all, the entire palace is in chaos, with everyone Bartholomew knows sinking in the ooze. Then, he suddenly realizes he never checked in on the King, so he hot-foots it to the throne room. There, he finds the King, knee-deep in the yuck, and totally helpless. He begs Bartholomew to fetch his magicians, but he can't as Mount Neeka-Tave is submerged in oobleck. The King tries to say some magic words, but they either don't work or just make things worse. Finally, Bartholomew works up the courage to tell the King off for his foolish wish, and that he should be apologizing for the mess he's made. The King is reluctant at first, but after Bartholomew tells him he's "no sort of King at all" if he and his subjects are drowning in oobleck, he tearfully apologizes.

At that moment, although it is unknown whether the King's apology was magic, the oobleck stops falling, and melts away as the sun penetrates the storm, freeing everyone stuck. Then, Bartholomew takes the King to the bell tower and he rings the bell. The King, having learned his lesson, declares a holiday in honor of the rain, sunshine, fog and snow: good enough for any kingdom, especially his own. 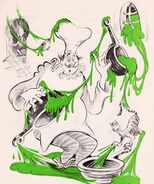 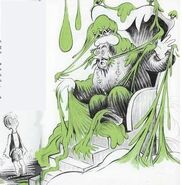 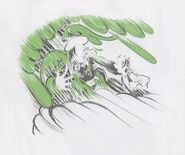 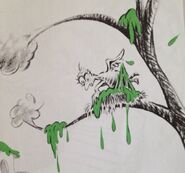 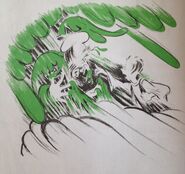 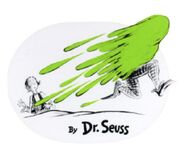 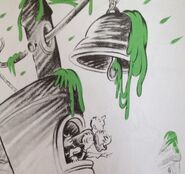 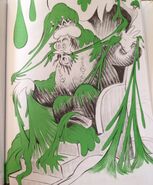 Add a photo to this gallery
Retrieved from "https://seuss.fandom.com/wiki/Bartholomew_and_the_Oobleck?oldid=38465"
Community content is available under CC-BY-SA unless otherwise noted.