Bernice Wiggins is Ted's mother and the daughter of Grammy Norma. She speaks with a sort of Brooklyn accent. In a way, her roles are somewhat reversed with her mother as she often speaks to her like a child. During lunch, she tells her son to stop playing with his food and then tells her mother as well. She seems to disbelieve in her mother's words at times. When Ted asks about trees, she brushes off her mother's mention of the 'Once-Ler' as one of her stories.

Bernice is shown to have a fondness of music and dancing, as she was shown to have a disco ball decoration in her rear view mirror of her car. Bethany is shown to be something a of typical mother, she tries to do family activities with her Wiggins family, she cares for her son, and is protective when she feels he's in danger. Though she has her stern moments, she's open to hearing something her son says. In a way, she is somewhat intimidated by Mr. O'Hare when he comes to confront Ted about the Truffula seed, but she shows she's no push over when she kicks him out for ruining her son's room and trying to threaten him. When her son reveals he has a Truffula seed, she aids in trying to get it planted by distracting one of O'Hare's bodyguards named Morty to chase her.

Bernice also encourages the town in "Let It Grow " along with others, to plant the tree.

Bernice is one of the several characters created solely for the film and not traced from the book or the animated short. 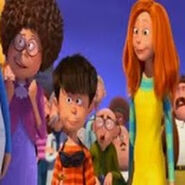 Add a photo to this gallery
Retrieved from "https://seuss.fandom.com/wiki/Bernice_Wiggins?oldid=44381"
Community content is available under CC-BY-SA unless otherwise noted.