Dr. Seuss Wiki
Register
Don't have an account?
Sign In
Advertisement
in: Dr. Seuss Characters, The Cat in the Hat, Males,
and 9 more

The Fish is a character from the Dr. Seuss book The Cat in the Hat and its TV special of the same name. His real name is revealed to be Carlos K. Krinklebine in the TV special The Cat in the Hat, while he had no name in any of the other adaptations of the book, in which he was just called 'Fish'.

He is skeptical about the Cat In The Hat being in the house while the children's mother is out (for good reason, as The Cat is a stranger who enters the house without permission, thus he is trespassing). He is also the pet of Sally and Conrad in The Cat in the Hat movie (2003) but, as of now he travels with the cat in The Cat in the Hat Knows a Lot About That!

Many fans who watch The Wubbulous World of Dr. Seuss think that he and Norval the Fish are the same person, when in reality, Norval appeared in You're Only Old Once!. 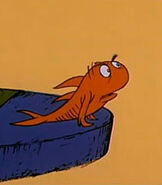 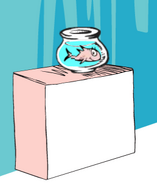 Fish From The Cat In The Hat Movie
Community content is available under CC-BY-SA unless otherwise noted.
Advertisement