Daisy-Head Mayzie is the last children's book officially written by Dr. Seuss, although he did not illustrate it, nor was it published until 1995, after his death.

The book is about a schoolgirl named Mayzie McGrew who one day suddenly sprouts a bright yellow daisy from her head. It causes alarm in her classroom, family, and town, until an agent makes her a celebrity. The Cat in the Hat is seen serving as the narrator to this story who helps Mayzie to understand her problem and persuade her to go back home. The book has a mini-song titled "Daisy-Head Mayzie" which her classmates chant.

In 1995, prior to its actual publication, the book was adapted into a special for television on TNT. The special, which was produced by Hanna-Barbera, can be found as a bonus feature on the Horton Hears a Who! Deluxe Edition DVD.

In 2011, Daisy-Head Mayzie was made a meetable character at Seuss Landing at Universal's Islands of Adventure. 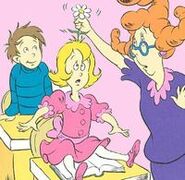 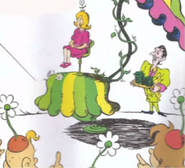 Add a photo to this gallery
Retrieved from "https://seuss.fandom.com/wiki/Daisy-Head_Mayzie?oldid=32204"
Community content is available under CC-BY-SA unless otherwise noted.