Dr. Harold Hoovey, Professor of Science is the secondary protagonist and main character of the 1970 TV special, "Horton Hears a Who!" (hereafter refered to as "Hoovey"). He replaces the mayor from the book.

This elderly man spent 50 years on his "Who-Scope" to prove to Who-Ville that other worlds exist outside theirs, but they just laugh at him. After Jane Kangaroo leaves, Hoovey starts talking to Horton, officializing that there IS someone there, and this life-form has sustained buildings.

He introduces himself as "Dr. H. Hoovey, professor of science" and explains how frustrating it is that no one believes Horton exists, and Horton promises to help. After the song "Mrs. Toucanela Said" ends, a feather lands on Horton's trunk, causing him to sneeze the speck away. He chases it, reclaims it, and Hoovey says that despite a breeze, they're fine. Every-Who then sings "Sitting on an Elephant's Nose" which frustrates Hoovey even more.

The Wickershams steal the speck and hand it to Whizzer McWoff, who drops it into a field of the same clover Who-Ville's speck rests on. When found, Hoovey declares Who-Ville having great damage, and NOW Who-Ville believes him, singing "Dr. Hoovey, You Were Right".

Now Jane has the Wickershams ready to rope and cage Horton the Elephant, and also boil the speck. With Who-Ville now at the brink of destruction, Hoovey starts up "The Noise Song" and encourages everyone to be loud, and also finds JoJo not helping, grabbing him and climbing his lab's tower. At the top, JoJo admits he's never tried saying "yipp" or "yopp". Hoovey quotes, "You better try soon, or you're going to be fried." JoJo tries to choose whether to say "yipp" or "yopp" , making Hoovey nervous. Finally, he utters, "Yopp!" and breaks the sound barrier. Jane Kangaroo and Junior lead and conduct a band for "We'll be Kind to Your Dust Speck".

As the special ends, Hoovey is last seen relaxing in his chair in the evening light. A dust speck floats by him, squeaking a cry for help, much to his dismay. 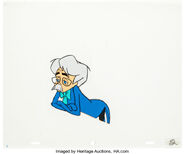 Add a photo to this gallery
Retrieved from "https://seuss.fandom.com/wiki/Dr._Harold_Hoovey?oldid=37423"
Community content is available under CC-BY-SA unless otherwise noted.