Dr. Seuss Wiki
Register
Don't have an account?
Sign In
Advertisement
in: Movies, Horton Hears a Who!, CGI Animated Films,
and 4 more

Horton Hears A Who! is a 2008 computer animated musical fantasy comedy adventure film based on the 1954 book of the same name by Dr. Seuss and the special in 1970. It stars Jim Carrey, Seth Rogen, Carol Burnett, Will Arnett, Steve Carell, Jesse McCartney, and Amy Poehler.

In the Jungle of Nool, a tiny speck of dust has landed on a pink flower. Meanwhile, a caring, imaginative elephant named Horton, the jungle's nature teacher, takes a dip in the pool. The speck of dust floats past him in the air, and he hears a tiny yelp coming from it. Believing that an entire family of microscopic creatures are living on that speck, he places it atop a clover. Horton finds out the speck harbors the city of Whoville and its inhabitants, led by Mayor Ned McDodd (Steve Carell). He has a wife, Sally, 96 daughters (whose names all begin with the letter H), and one teenage son named JoJo. Despite being the oldest and next in line for the mayoral position, JoJo doesn't want to be mayor, and he's so scared of disappointing his father, he rarely ever speaks.The Mayor finds out from Dr. LaRue that Whoville will be destroyed if Horton does not find a "safer, more stable home." Horton resolves to place the speck atop Mt. Nool, the safest place in the jungle. Jane Kangaroo (Carol Burnett), not believing Horton's beliefs, tries to get Horton to give up the speck, but Horton refuses. Also taking force toward Horton are the Wickersham brothers, a group of bullying monkeys who love making misery. The Kangaroo eventually enlists a vulture named Vlad Vladikoff (Will Arnett) to get rid of the speck by force. After a failed attempt by Vlad, the Kangaroo finds out that Horton still has the speck, and decides to rally the jungle community into confronting Horton by telling lies that Horton's goal will lead to anarchy. The Kangaroo offers Horton to give up the speck. When Horton refuses, she orders the animals to rope and cage him and issue Whoville's destruction via a pot of boiling beezelnut oil. The Mayor enlists all of his people to make noise by shouting "We are here," as well as playing a variety of instruments, so the animals may hear them. The Kangaroo takes the clover and drops it into the boiling oil. At the last minute, JoJo grabs the horn used to project Horton's voice, runs up the highest tower and yells "YOPP!", breaking through the sound barrier, just before the speck hits the oil. The Kangaroo's son, Rudy, grabs the flower and warns everyone that the whos are here. The animals realize that Horton was right all along, thinking that the Kangaroo was trying to crush Horton's spirit and build her own reputation in the jungle. While realizing what she almost did is wrong and feeling ashamed of herself, The Kangaroo tries to take the flower out of Rudy's hand, but Rudy dodges, gets out of the pouch, and returns the clover to Horton. The Kangaroo "sweetly" tells her son to get back to her pouch, but Rudy refuses his mother's orders to return to her pouch. The Kangaroo bossily orders the Wickersham brothers to take the flower from Rudy, but they refuse to trust her anymore as they let him give the flower to Horton. The Kangaroo tries to order the animals of Nool to take the clover from her son, but they isolate her for tricking them, much to the Kangaroo's sadness. While being praised for his integrity by his neighbors, and gained a cookie from a bunny named Vlad, Horton is apparently nice enough to even forgive the Sour Kangaroo by giving her the cookie when he sees her sulking in sorrow, feeling embarrassed, regretful, and left out, and she accepts his friendship with a makeshift umbrella for Whoville, finally believing that there are people on the speck after all. Horton thanks the animals of Nool, Morton, who stood by him, and, most importantly, Ned McDodd, who believed in him from the very beginning. JoJo asks Horton what are they gonna do without him, and Horton replies that he'll always be around. Here, the people of Whoville and the animals of Nool gather in song and recite the chorus from "Can't Fight This Feeling." The film ends with the narrator revealing that the Jungle of Nool is just one speck, among numerous others, floating in the universe. 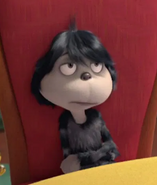