Horton Hears a Who is a cartoon based on Dr. Seuss' book of the same name. It is produced by MGM Studios 1970.

In the Jungle of Nool, the dueteragonist of the special, Horton the elephant bathes in the watering hole when he sees a small dust speck floating by. He hears a call for help coming from the dust speck and, thinking someone is living on it, saves it from going over a waterfall. Setting it on top of a clover, he discovers it is home to a tiny town called Whoville, home to the microscopic Whos. One of the Who's and the special's protagonist and star, scientist Dr. Harold Hoovey (replacing the Mayor), communicates with Horton through a device he built to see other worlds outside of the speck. The other Whos, however, only laugh at him, thinking nothing exists beyond their world. Horton promises to protect Whoville from harm, feeling that "a person's a person, no matter how small." The other animals in the jungle — particularly the cynical Jane Kangaroo — think he is crazy, and do not believe in the existence of the Whos.

Thinking Horton's behavior is a problem, Jane sends the Wickersham Brothers to take the clover with the speck from him. They give the clover to the black-bottomed eagle Whizzer McWoff, who flies away with it. Horton pursues McWoff across the mountains below, but the eagle drops the clover into a large field of clovers and leaves Horton to find it. Horton searches frantically through the field, eventually finding his clover, and learns from Dr. Hoovey that Whoville was badly damaged when the clover was dropped. The other Whos, seeing the destruction as proof that Dr. Hoovey was right, rally behind him.

Jane finds Horton with the clover and, with help from the Wickersham Brothers (and their relatives), plans to end Horton's "problem" once and for all and they tie Horton up and pulls him into a cage, intending to boil the dust speck in beezle-nut oil. Horton urges the Whos to make noise to prove their existence, but even with the Whos' shouting and loud instruments, the other animals still hear nothing. Dr. Hoovey searches through town and finds a small Who named JoJo, who is bouncing a yo-yo instead of making noise. He takes JoJo to the top of his tower, where JoJo utters a "Yopp", which breaks through the dust speck and allows the animals to finally hear the Whos and they release Horton and allow him to keep it. The special ends with Dr. Hoovey relaxing in his chair when he sees a small dust speck and hears a call for help coming from it, much to his dismay. 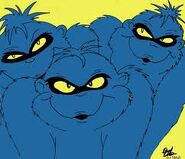 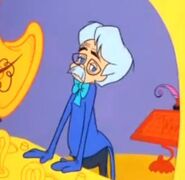 Add a photo to this gallery
Retrieved from "https://seuss.fandom.com/wiki/Dr._Seuss’_Horton_Hears_a_Who!_(TV_Special)?oldid=43773"
Community content is available under CC-BY-SA unless otherwise noted.