The Fiffer-feffer-feff is a strange creature from the book Dr. Seuss's ABC.

He has four fluffy feathers on his head.

In the living books version, his feathers fluffy up after he counts how many he has and he makes them roll down and back up again.

He notices a team of 5 frogs with flags flip flopping in formation.

His first feather on his head morphs into a hand waving at Icabod and Izzy, his second feather tickles the third feather, the third feather begins flashing, and the final feather spontaneously burns in flames off his head but he quickly grows another.

Icabod and Izzy beleives Fiff's face is Funny and Fiff makes funny faces at them.

He plays a flute very well moving his fast fingers on it and takes a bow for his audience.

A Zed comes out the words "BIG" and bounces on the letters F..f..F and hops in between Fiff's feathers being tickled then hops away saying his feathers are funny much to Izzy and Icabod's surprise.

His favorite food is French Fried Fudge. He takes a bite of one and eats it then breaks out into a 3 second dance after that then he dances again as Izzy mentions that Fiff's feet keeps a funky beat

He plays a small game of football with a frog who recently ate a fly.

His nickname is Fiff as his friends call him. 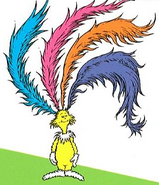 Add a photo to this gallery
Retrieved from "https://seuss.fandom.com/wiki/Fiffer-feffer-feff?oldid=42109"
Community content is available under CC-BY-SA unless otherwise noted.