Fox in Socks is a book written by Dr. Seuss, a collectors version of this book along with a plush of the Fox. Fox in Socks was made by Kohl's Cares for Kids in 2008. Fox in Socks is a children's book by Dr. Seuss, first published in 1965. It features two main characters, Fox (an anthropomorphic Fox) and Knox (an anthropomorphic dog), who speak almost entirely in densely rhyming tongue-twisters. Both stories contain two main characters: one who is stubborn and wants to be left alone due to the toungue twisting game being quite difficult.

This book was also used in the Random House Home Video Series which entitles "Dr. Seuss Beginner Book Video" along with two other books The Cat in the Hat Comes Back and There's a Wocket in my Pocket!

The book begins by introducing Fox and Knox (sometimes called "Mr. Fox" and "Mr. Knox") along with some props (an orange box and a pair of blue socks). After taking those four rhyming items through several permutations, more items are added (chicks, bricks, blocks, clocks), and so on. As the book progresses Fox describes each situation with rhymes that progress in complexity, with Knox periodically complaining of the difficulty of the tongue-twisters. Finally, after Fox gives an extended dissertation on Tweetle Beetles who fight (battle) with paddles while standing in a puddle inside a bottle on a noodle-eating poodle (a Tweetle Beetle Bottle Puddle Paddle Battle Muddle), Knox acts on his frustration by stuffing Fox into the bottle, reciting a tongue-twister of his own: When a Fox is in the bottle where the tweetle beetles battle with their paddles in a puddle on a noodle-eating poodle, THIS is what they call... ...a tweetle beetle noodle poodle bottled paddled muddled duddled fuddled wuddled Fox in socks, sir! Knox then declares that the game is finished, sarcastically thanking Mr.Fox for the fun, and walks away while the beetles, poodle, and stunned Fox watch.

The Tweetle Beetle skit was featured in The Hoober-Bloob Highway, a 1975 CBS television special. Here, the skit was part of a job: that of a "famous Tweetle Beetle statistician". If you took on this job, "you could be the world's greatest authority on Tweetle Beetle battlistics, if you study Tweetle Beetles and their ballistic characteristics." It ended by cutting back to the base, with Mr. Hoober-Bloob waving his arms around, covering his ears, and yelling, "Stop it! Stop it! I can't stand it! That world is a vastly cruddy, bloody bore!" The dissertation was read by Bob Holt, the voice of Mr. Hoober-Bloob, using a German impression similar to Ludwig von Drake. On the Dr. Seuss Presents... Audio CD Series, the story was narrated by Marvin Miller (read in both a normal-speed and a fast version), along with Green Eggs and Ham, Horton Hatches the Egg, The Sneetches and Other Stories, Yertle the Turtle and Other Stories, Bartholomew and the Oobleck, If I Ran the Zoo and Dr. Seuss's Sleep Book. The entire book was translated by the Israeli author and lyricist Leah Na'or into Hebrew as "בא עם גרבים" (Ba Im Garba'im, literally "He Came With Socks"). Some emendations were made to the original text for better rhyming; for example, Knox's name, in this version, is "ברגז" (Bargaz), to rhyme with "ארגז" (argaz, meaning box), and the chicks in the beginning of the book became ducks. Occasionally the translator wrote a new tongue-twister to fit the existing artwork; the entire poem about the cheese trees, for instance, was replaced with an entirely new poem about an elephant who tripped and fell on his nose. This version of the book was published in 1980 by Keter Publications in Jerusalem. In 1994, Mr. Fox, Mr. Knox and "Three Cheese Trees" appeared in Storybook Weaver, and later in 2004, deluxe version in Storybook Weaver Deluxe. 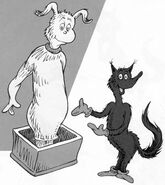 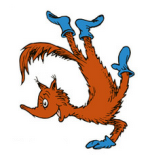 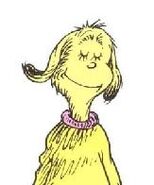 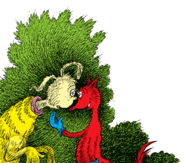 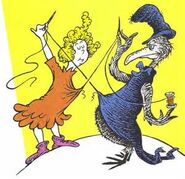 Fox in Socks By Dr. Seuss

Add a photo to this gallery
Retrieved from "https://seuss.fandom.com/wiki/Fox_in_Socks?oldid=43151"
Community content is available under CC-BY-SA unless otherwise noted.