Gerald McBoing-Boing is a character created by Dr. Seuss. He can't talk like other people, so he communicates by making sounds.

The character first appeared on a record issued by Capitol Records in 1950 and than an animated short film by UPA, released the same year, which won an Academy Award for Best Animated Shot. Three other shorts were made Gerald McBoing-Boing'?s Symphony (1953), How Now Boing Boing (1954), and Gerald McBoing-Boing on the Planet Moo (1956).

he was kinda a lonely boy because locals kids and teachers didn't like hear him use sounds they wanted him to use words but since he couldn't they shunned him.

kids teased him till he cried by chanting "nah nah your names not mcloyde your mcboing boing the noise making boy" he ran crying to his father and cried but all that came out were tears and sirens and honking and breaking glass till he father made him go 2 his room.

wanting nothing to do with his family or his home he ran away until a kind old radio producer found him gave him a job and told him that his talent is a wonderful peculiar thing and he shouldn't hide it or run from it he needs to embrace it. 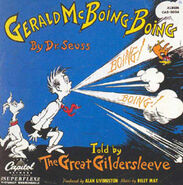 Add a photo to this gallery
Retrieved from "https://seuss.fandom.com/wiki/Gerald_McBoing-Boing?oldid=43670"
Community content is available under CC-BY-SA unless otherwise noted.