Gertrude McFuzz is a character from the Dr. Seuss Books. She is from Gertrude McFuzz, and Seussical the Musical. She was a girl-bird that had one feather. She ate pill-berries that her uncle, Doctor Dake told her of. In the book, she eats a vine of unnamed berries that have the same effects.

Miss Gertrude McFuzz is a fictitious character in: Dr. Seuss's homonymous short story Miss Gertrude McFuzz, Yertle the Turtle and Other Stories and the Broadway musical Seussical, which elaborates upon her story. She is one of the main female roles along with Mayzie and Mrs. Mayor. In 'Seussical the Musical', Gertrude McFuzz is an awkward, determined little bird with a one-feather tail, of which she is very ashamed. She falls for Horton the Elephant, but Horton does not notice her as he is busy finding the Whos. Gertrude thinks Horton does not notice her due to her small tail, so she takes advice from Mayzie and takes pills, causing her tail to grow. Horton still does not notice her and Gertrude finally comes to realize that beauty is not everything. The two do soon fall in love, and raise Mayzie's abandoned child in Seussical.

Yertle the Turtle and Other Stories (1958)

Gertrude is a girl-bird that is desperately trying to grow her tail, due to it having one feather, being in the shadow of Lolla-Lee-Lou, who has many feathers. She goes to her uncle, Doctor Dake. He tells her of special berries that will make her tail grow, causing her to eat the entire vine. She cannot move because of her huge tail, causing Dake and other birds carry her to pluck the feathers. In the end, she realizes she is not ugly as she thought before, but smarter.

In order to improve her appearance, and in the process win the heart of Horton the Elephant, Gertrude follows the advice of Mayzie LaBird and takes special pill-berries that allow her to grow more feathers on her tail. Horton, in his effort to find his lost clover, overlooks Gertrude's affections. Her pill-berry obsession grows out of control when she sprouts too many feathers and is unable to fly to Horton's rescue upon his capture by hunters. Near the end of the musical a once again single-feathered Gertrude returns to Horton, where he is imprisoned at the Circus McGurkus, to convey to him her true feelings and that she plucked out her beautiful tail in an effort to save him and return to him his clover that she had found after seven long weeks of searching.

Horton finally sees Gertrude, they fall in love, and Gertrude promises to help care for the newly hatched elephant bird: "I have wings, yes I can fly, you teach him earth and I will teach him sky". Gertrude's solos include the songs "Biggest Blame Fool Playoff/Gertrude McFuzz", "Amayzing Gertrude Part 1", "Amayzing Gertrude Part 2", "The One Feather Tail of Miss Gertrude McFuzz", "Notice Me Horton", and "All for You".

In the original version of her book, she is completely white with a single green feather for her tail. She also has a single uncolored curl of hair on the top of her head. Her tail grows to be large and multicolored during the story. In subsequent publications, including digital publications, she has been depicted as having blue, yellow, or red feathers. In Seussical, she usually wears a blue dress to represent blue feathers, as this was her costume in the original Broadway production. 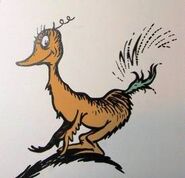 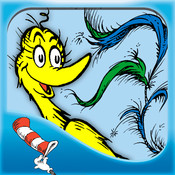 The first page of Gertrude Mcfuzz 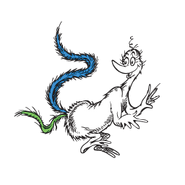