The second story of Yertle the Turtle recounts the tale of the "girl-bird" Gertrude McFuzz, who has a small, plain tail feather and envies Lolla Lee Lou, who has two feathers. She goes to her uncle, Doctor Dake and he tells her where she can find berries that will make her tail grow, and she eats the entire vine, causing her tail to grow to an enormous size. However, the added weight of too many feathers does not allow her to fly, run or even walk! So she panics by yelping repeatedly, while being stuck on the hill. So her uncle, who hears her painful yelps, sends for the rescue, and many other birds are forced to carry her home and pluck out her tail feathers, which takes a few weeks, causing her to be sore. Though she has only one feather left—as before—she now has "enough, because now she is smarter." 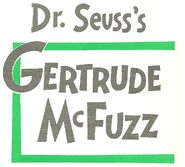 Add a photo to this gallery
Retrieved from "https://seuss.fandom.com/wiki/Gertrude_McFuzz_(book)?oldid=24229"
Community content is available under CC-BY-SA unless otherwise noted.