The book's authorship is sometimes incorrectly attributed to Dr. Seuss, due to the similarities in style to his writing and both authors being published under the Beginner Books series. This book was used in the Beginner Book video series.

Go, Dog. Go! is a 1961 children's book written and illustrated by P. D. Eastman. The book describes the actions and interactions of a group of highly mobile dogs, who operate cars and other conveyances in pursuit of work, play, and a final mysterious goal: a dog party. The book introduces concepts such as color and relative position with simple language and humor. ("The blue dog is in. The red dog is out.") Throughout the book, details in Eastman's illustrations seem to invite the reader to notice the deeper significance of small things. In their first appearance, a girl dog asks a boy dog if he likes her hat with its little flower. He does not; they part. Several pages later, we meet them again. Now they are riding scooters; she has a hat with a feather. Again, he does not like her hat, but as they part, he has made off with the feather. When we next see them together, they are skiing. The boy dog does not like the long ski cap the girl dog is wearing. They part as she bids him an angry farewell. In their final meeting her hat is even more elaborate and finally meets the approval of the boy dog; in this way a relationship is developed between the characters despite the simplicity of the text. In 2003, a musical version of the book for the stage was created by Steven Dietz and Allison Gregory for the Seattle Children's Theatre. This play has been widely staged throughout the US, often as an introduction to theater for young children.[1] Actress Jamie Lee Curtis has stated that it is her favorite, or one of her favorite books of all time, in an interview with Borders.

In the South Park episode "Chickenlover", Officer Barbrady says how he finished the book and describes it as "a heartwarming novel." Mr. Garrison gives him an A.

This book was part of a P.D. Eastman Beginner Book Video series including other stories like The Best Nest and Are You My Mother? 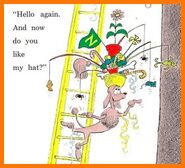 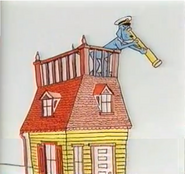 Add a photo to this gallery
Retrieved from "https://seuss.fandom.com/wiki/Go,_Dog._Go!?oldid=39941"
Community content is available under CC-BY-SA unless otherwise noted.