​Guy-Am-I (sometimes vaguely known as Grouchy Guy or Sam's Friend before the Netflix series) is a grumpy man who doesn't like green eggs and ham until the end of the story, and also serves as the deuteragonist or co-protagonist in the book Green Eggs and Ham.

In the book Green Eggs and Ham and the eponymous cartoon adaptation from Dr. Seuss on the Loose, Sam-I-Am tries to pester Guy-Am-I to eat the strange-looking dish mentioned in the title, but Guy tells him he hates that food by saying, "I do not like them, Sam-I-Am. I do not like green eggs and ham." Guy Am I continues to repeat similar responses as Sam-I-am persistently follows him. In exasperation, Guy finally gives in, agrees to try Green Eggs and Ham. After sampling the dish, he happily declares that he likes them. When he ends the story by saying, "I do so like green eggs and ham. Thank you. Thank you, Sam-I-Am", Guy has learned his lesson and now knows it is important to try something new, especially food, even if it doesn't seem appealing at first.

Guy-Am-I is a frustrated failed inventor whose inventions always explode. He meets Sam at Donna's Diner, and accidentally switches his briefcase with the Self Flyer and Sam's briefcase with Mr. Jenkins. They begin traveling together and form a friendship, until Guy discovers that Sam is a con artist, making Guy get angry with him and even say that he did not fit anyone, not even his own mother. This line makes Sam upset with Guy, until the latter decides to eat Green Eggs and Ham by his own volition to show how much he cares for Sam. Like in the book and special, Guy ends up loving the dish, and says that he will eat with all the animals and in all the locations he has been offered throughout the series. 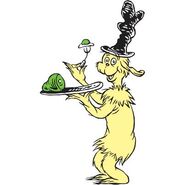 Guy Am I in "Living Books"

Add a photo to this gallery
Retrieved from "https://seuss.fandom.com/wiki/Guy-Am-I?oldid=45086"
Community content is available under CC-BY-SA unless otherwise noted.