Page after page of silly rhymes and comical pictures will keep your little one giggling in this Dr. Seuss favorite. The book's simple words, sentences, and meanings are wonderful learning material for early readers, who will be captivated by Seuss's magical wackiness.

Hop on Pop is a book written by Dr. Seuss in 1963 It is often remarked as one of Seuss' simplest books. Kohl's Cares for Kids released a collectors version of this book, though there isn't any significant differences except the collectors emblem on the cover. It was published as part of the Random House Beginner Books series, and is subtitled "The Simplest Seuss for Youngest Use". It contains several short poems about a variety of characters, and is designed to introduce basic phonics concepts to children.

One of Geisel's manuscript drafts for the book contained the lines, "When I read I am smart / I always cut whole words apart. / Con Stan Tin O Ple, Tim Buk Too / Con Tra Cep Tive, Kan Ga Roo." Geisel had included the contraceptive reference to ensure that publisher Bennett Cerf was reading the manuscript. Cerf did notice the line, and the poem was changed to the following: "My father / can read / big words, too. / Like... / Constantinople / and / Timbuktu."

This book was also used in the Random House Home Video Series which entitles "Dr. Seuss Beginner Book Video" along with two other books "Oh Say Can You Say?" and "Marvin K. Mooney Will You Please Go Now!"

A popular choice of elementary school teachers and children's librarians, Hop on Pop ranked sixteenth on Publishers Weekly's 2001 list of the all-time best-selling hardcover books for children. Based on a 2007 online poll, the National Education Association named the book one of its "Teachers' Top 100 Books for Children." One of the book's most notable advocates is former United States First Lady Laura Bush, who listed it as her favorite book in a 2006 Wall Street Journal article. "It features Dr. Seuss's typically wonderful illustrations and rhymes, of course, but the main thing for me is the family memory—the loving memory—that the book evokes of George lying on the floor and reading it to our daughters, Barbara and Jenna. They were little bitty things, and they took Hop on Pop literally, and jumped on him—we have the pictures to prove it," she wrote.

Like many Dr. Seuss books, Hop on Pop has inspired others. Big Brother Mouse, a publishing project in Laos, drew on Hop on Pop to develop The Polar Bear Visits Laos, which matches short sentences that include an internal rhyme with cartoon images. 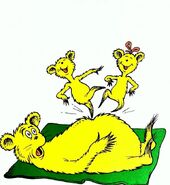 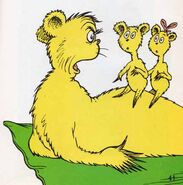 you must not hop on pop 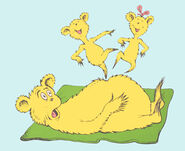 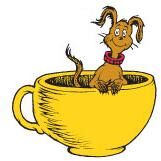 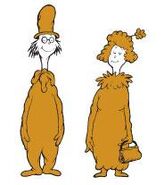 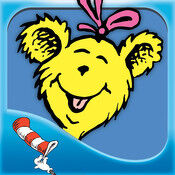 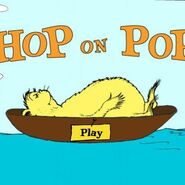 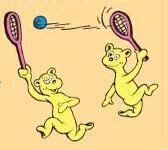 Video Book, which also features Marvin K. Mooney, Will You Please Go Now! and Oh Say Can You Say? 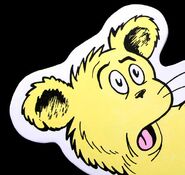 This page doesn't have one yet. Please write one!

Retrieved from "https://seuss.fandom.com/wiki/Hop_on_Pop?oldid=43847"
Community content is available under CC-BY-SA unless otherwise noted.