How the Grinch Stole Christmas! is a Dr. Seuss television special.

The Grinch (voiced by Boris Karloff) is a surly, antisocial green creature with a heart "two sizes too small" who lives alone in a cave atop Mt. Crumpit, located above the village of Whoville. He especially hates Christmas and has spent the last 53 years annoyed by their Christmas celebrations. In particular, he hates the noise, the gluttonous feasting, and the Christmas music. On Christmas Eve, he finally has enough and decides to stop Christmas Day from coming to Whoville at all.

The Grinch makes himself a Santa Claus-style coat and hat, to disguise himself as the famed Christmas character. He also disguises his dog Max as a reindeer. The Grinch then loads empty bags onto a sleigh and travels to Whoville in the night. Acting as the reverse of Santa Claus, he takes everything Christmas-themed in the first house he finds. In so doing, he is almost caught by Cindy Lou Who (voiced by an uncredited June Foray[1]), a toddler Who girl who wakes up and sees him taking the Christmas tree. Maintaining character as Santa, the Grinch tells Cindy Lou that he is merely taking the tree to his workshop for repairs, and then gets her a drink before sending her back to bed. He finishes emptying the first house of all the Christmas-related items, then repeats the process at the other houses in Whoville.

With the Whos' stolen Christmas goods, the Grinch and Max travel back up Mt. Crumpit. Before dropping the loaded sleigh off the mountain, the Grinch listens, excitedly, to hear cries of anguish from the Whos when they wake to discover their losses. However, down in the village, the Whos joyously begin to sing Christmas carols as though nothing had happened, proving that the spirit of Christmas does not depend on material things. At first, the Grinch is confused, but he then begins to understand the true meaning of Christmas. Just as the stolen Christmas items begin to slip off the mountain edge, the Grinch rushes to save them. His heart grows three sizes, granting him "the strength of ten Grinches, plus two!", which he needs to lift the sleigh to safety. He brings everything back to the Whos and participates in the holiday feast. He is given the honor of carving the Whos' favorite Christmas dish, a rare roast beast, and Max gets the first slice for all his troubles.

While the grinch was cutting off the antlers one antler branch was in the back and was cut even though it wasn't touched. 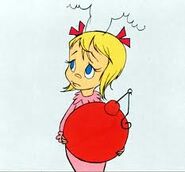 Retrieved from "https://seuss.fandom.com/wiki/How_the_Grinch_Stole_Christmas!_(TV_Special)?oldid=43266"
Community content is available under CC-BY-SA unless otherwise noted.