If I Ran the Zoo is a book written by Dr. Seuss.

If I Ran the Zoo is a children's book written by Dr. Seuss in 1950. The book is written in anapestic tetrameter, Seuss's usual verse type[citation needed], and illustrated in Seuss's trademark pen and ink style. The book is likely a tribute to a child's imagination[citation needed], because it ends with a reminder that all of the extraordinary creatures exist only in McGrew's head. If I Ran the Zoo is often credited with the first printed modern English use of the word "nerd," in the sentence "And then, just to show them, I'll sail to Ka-Troo/And Bring Back an It-Kutch, a Preep, and a Proo,/A Nerkle, a Nerd, and a Seersucker too!" In the book, Gerald McGrew is a kid who, when visiting a zoo, finds that the exotic animals are "not good enough". He says that if he ran the zoo, he would let all of the current animals free and find new, more bizarre and exotic ones.

Throughout the book he lists these creatures, starting with a lion with ten feet and escalating to more imaginative (and imaginary) creatures, such as the Fizza-ma-Wizza-ma-Dill, "the world's biggest bird from the island of Gwark, who eats only pine trees, and spits out the bark." The illustrations also grow wilder as McGrew imagines going to increasingly remote and exotic habitats and capturing each fanciful creature, bringing them all back to a zoo now filled with his wild new animals. He also imagines the praise he receives from others, who are amazed at his "new Zoo, McGrew Zoo". Some of the animals featured in "If I Ran the Zoo" have been featured in a segment of The Hoober-Bloob Highway, a 1975 CBS TV Special. In this segment, Hoober-Bloob babies don't have to be human if they don't choose to be, so Mr. Hoober-Bloob shows them a variety of different animals, including ones from "If I Ran The Zoo", such as Obsks, Bippo-No-Bungus, a Tizzle-Topped Tufted Mazurka, the helicopter bug, the Chuggs, the hens that roost atop each other, and an Elephant-Cat.

This Book has been used for a Random House inc production entitled "Dr. Seuss Video Classics" Video series which also features How the Grinch Stole Christmas!

"If I Ran the Zoo" Dr. Seuss's "If I Ran the Zoo" book is also the main theme for one of the children's play areas at Universal Studios' Islands of Adventure. The small play area is located inside the area of the park known as Seuss Landing, and is themed in the Seussean way Dr. Seuss is famous for.

This could be a reference to his father running the forest park zoo in his hometown, Springfield, Massachusetts.

An animation short directed and produced by Ray Messecar and narrated by Bret Ambler. 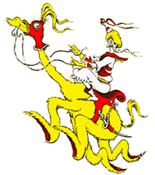 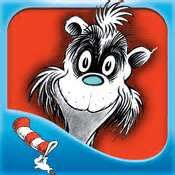 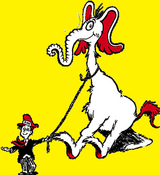 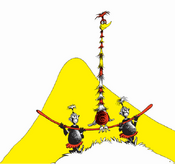 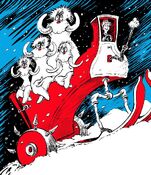 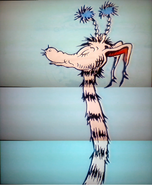 Add a photo to this gallery
Retrieved from "https://seuss.fandom.com/wiki/If_I_Ran_the_Zoo?oldid=32596"
Community content is available under CC-BY-SA unless otherwise noted.