Marvin K. Mooney is a character from the Dr. Seuss books. He's probably most well-known for being the main character in the Dr. Seuss Book: Marvin K. Mooney Will You Please Go Now!. The individual (who is possibly his father or grandfather) suggests ways of how Marvin K. Mooney can go. Exactly where he has to go is unknown. However, it's maybe to bed, as Marvin wears a purple pajamas jumpsuit. In the end, the individual (his father or grandfather) has a hand which turns into a massive size. Then he says in big words, "I said 'GO!' and 'GO!', I meant!".

Marvin's a small dog-like creature that wears a lavender jumpsuit with a small bright yellow spot in the upper center. 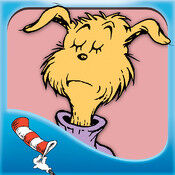 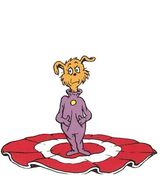 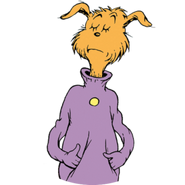 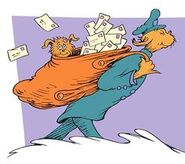 Add a photo to this gallery
Retrieved from "https://seuss.fandom.com/wiki/Marvin_K._Mooney?oldid=42979"
Community content is available under CC-BY-SA unless otherwise noted.