Marvin K. Mooney Will You Please Go Now! is A Bright & Early Book written and illustrated by Dr. Seuss. It concerns the titular character, Marvin K. Mooney (an anthropomorphic dog-person) who is being told that it is time to go by unseen individual, possibly his father. Exactly where he is to go is never specified, though it maybe to bed, given that he is wearing a pajama jumpsuit.

This book was also used in the Random House Home Video Series which entitles "Dr. Seuss Beginner Book Video" along with two other books Hop on Pop and Oh Say Can You Say?

Throughout the book, the unseen individual suggests a number of creative ways that Mooney might go, including such fanciful devices as a "Bumble-Boat" or a "Ga-Zoom," which would let him go with a boom. 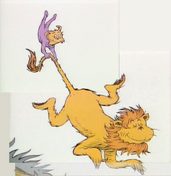 Add a photo to this gallery
Retrieved from "https://seuss.fandom.com/wiki/Marvin_K._Mooney_Will_You_Please_Go_Now!?oldid=39229"
Community content is available under CC-BY-SA unless otherwise noted.