McElligot's Pool is Seuss's sixth book, published in 1947, seven years after his previous. It went on to win the Young Reader's Choice Award three years later. Pool features the protagonist of And to Think That I Saw it on Mulberry Street, Marco, and again centers on the same themes of child imagination and how it is restricted by the adult world, as he describes the colorful array of fish he could catch in the pool if he only is patient. The text was adapted into one of the songs in Seussical the Musical, "Anything's Possible."

Marco, to the farmer:

The optimistic narrator for the majority of the book. Just like in his last appearance, he has an extraordinary skill for creating alternative stories for a dull and unsatisfactory reality. He values patience and believes that through it, greater rewards can be achieved ( "one doesn't catch this kind of fish as a rule, but chances are fine in McElligot's Pool."), despite the outward beliefs of society.

The skeptic, who informs Marco of the futility of his act and "wishes," believing he "might as well know it." He stays, however, to listen to Marco's long-winded rationale with some degree of awe.

Marco has been fishing in McElligot's Pool, tiny pond and town trash receptacle, with no success. When a local farmer tells him he won't catch a fish in fifty years, Marco launches into his imaginings -- that the pool could be connected to underground brooks running under the town and two the sea for miles, perhaps all over the world. He describes the multitude of fictional fish he could catch: thin fish, stout fish, short fish, long drawn-out fish, dogfish, catfish, pinwheel-tail fish, sail-fin fish, young high-jumping friskers, old whisker fish, fish with curly noses, rooster fish, checkerboard belly fish, strawberry jelly fish, seahorses, cow fish, sunburned tropical fish, eskimo fish of Hudson Bay, two-headed twisting eels, grouchy fish, Australian kangaroo fish, long-snouted saw-fish and assistant fish, rough-neck muscular lobsters, flower-liking fish, overarm stroke fish, strange island skiing fish, acrobat school circus fish, parachuting Tibet fish, glurking fish, herds of whales, and a thingamajigger. The protagonist believes that, by catching these fish, he can attain a sense of pride and surprise everyone, including the farmer -- perhaps educating them on the value of a child's sense of trust in fantasy. 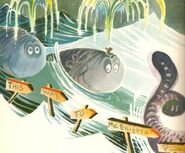 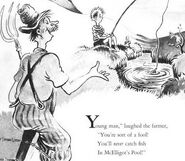 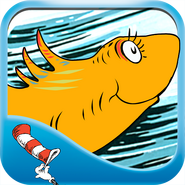 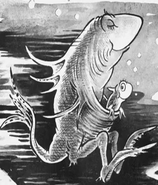 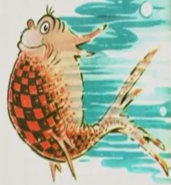 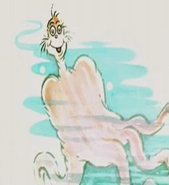 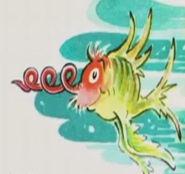 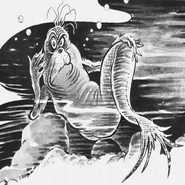 Retrieved from "https://seuss.fandom.com/wiki/McElligot%27s_Pool?oldid=34983"
Community content is available under CC-BY-SA unless otherwise noted.