Mongooses are small animals from "The Cat in the Hat Knows a Lot About That".

The marsh mongoose's dark brown fur (lighter on the undersides), with black-tipped guard hair, is long and coarse on the body and short about the hands and feet. The paws, unwebbed with underdeveloped pads, are soft and sensitive, with the thumb passively enhancing grip on slippery surfaces. The claws are short and blunt and used for digging . There is little hair around the anus and on the upper lip. Typically, there are two pairs of mammae. The lower canines are well formed while the premolar teeth are thick and used for crushing hard foods. The thick tail narrows shortly to a point.

The Indian grey mongoose, or common grey mongoose, is a medium sized tawny or yellowish grey with a lighter underside, darker feet, and dark red tail tip. They have a reddish tint to their heads. Their tail length equals their body length. Body length: 36-45cm (14-17 inches) Tail length: 45 cm (17 inches), weight: 0.9-1.7kg (2-4 lb). Males are significantly larger than the females. Mongooses can see colours, unlike most mammals, which have only partial colour vision. A mongoose cracks eggs open by standing with its back to a wall and throwing the eggs under its body and between its back legs so that the eggs break against the wall. Indian grey mongooses are often kept as pets to keep houses free from rats and other pests. The mongoose closes its outer ear when hunting in soil to keep out dirt and water

The banded mongoose is a sturdy mongoose with a large head, small ears, short, muscular limbs and a long tail, almost as long as the rest of the body. Animals of wetter areas are larger and darker colored than animals of dryer regions. The abdominal part of the body is higher and rounder than the breast area. The rough fur is grayish brown, and there are several dark brown to black horizontal bars across the back. The limbs and snout are darker, while the underparts are lighter than the rest of the body. Banded mongooses have long strong claws that allow them to dig in the soil. An adult can reach a length of 30 to 45 cm and a weight of 1.5 to 2.25 kg. The tail is 15 to 30 cm long.

The meerkat is a small diurnal mongoose weighing on average about 731 grams (1.61 lb) for males and 720 grams (1.6 lb) for females. Its long slender body and limbs give it a body length of 25 to 35 centimetres (9.8 to 14 in) and an added tail length of 17 to 25 centimetres (6.7 to 9.8 in). Its tail is not bushy like all other mongoose species, but is rather long and thin and tapers to a black or reddish colored pointed tip. The meerkat uses its tail to balance when standing upright, as well as for signaling. Its face tapers, coming to a point at the nose, which is brown. The eyes always have black patches around them and it has small black crescent-shaped ears that can close to exclude soil when digging. Like cats, meerkats have binocular vision, a large peripheral range, depth perception, and eyes on the front of their faces. At the end of each of a meerkat's "fingers" is a non-retractable, strong, 2 centimetres (0.79 in) long, curved claw used for digging burrow and digging for food. Claws are also used with muscular hindlegs to help climb trees. Meerkats have four toes on each foot and long slender limbs. The coat is usually fawn-colored peppered with gray, tan, or brown with a silver tint. They have short parallel stripes across their backs, extending from the base of the tail to the shoulders. The patterns of stripes are unique to each meerkat. The underside of the meerkat has no markings, but the belly has a patch which is only sparsely covered with hair and shows the black skin underneath. The meerkat uses this area to absorb heat while standing on its rear legs, usually early in the morning after cold desert nights.

The fossa is the largest mammalian carnivore on the island of Madagascar and has been compared to a small puma. Adults have a head-body length of 70–80 cm (28–31 in) and weigh between 5.5–8.6 kg (12–19 lb), with the males larger than the females. It has semi-retractable claws and flexible ankles that allow it to climb up and down trees head-first, and also support jumping from tree to tree. The fossa is unique within its family for the shape of its genitalia, which share traits with those of cats and hyenas.

Gallery of Mongooses from Franchise

A Marsh Mongoose in the water

A meerkat standing on its hind legs

A yellow mongoose vs a cobra 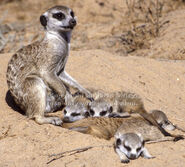 A meerkat with four kits

A foosa drinking
Add a photo to this gallery
Retrieved from "https://seuss.fandom.com/wiki/Mongoose?oldid=8758"
Community content is available under CC-BY-SA unless otherwise noted.