Start a Wiki
Mr. Box Knox in Box is a character from the Dr. Seuss book, Fox in Socks. He also appeared in The Wubbulous World of Dr. Seuss. He is an anthropomorphic Knox wearing a yellow jumper. and has an orange box he likes to be in at times. In the Book, Mr Fox tries to teach him "Knox" about tongue twisting words by taking him on an adventure, the game starts out well with socks, and a box until it gets a little too intense for him when the chicks with blocks and bricks and clocks. Meeting the Goo-Goose, Sue, Slow Joe Crow, Bim and Ben and pigs, Luke Luck and his duck. Mr. Knox believes that he doesn't have what it takes to say those tongue twisting riddles in the way how Mr. Fox says it.

So Mr. Fox tries to find other things happening where it could be more easy for him to say it. but for Mr Knox it doesn't seem to get easy for him but then Mr. Knox finally understand the tongue twisting game having enough of Mr. Fox's riddles and he stuffs him into a big bottle of fighting Tweetle Bweetles that is being held by a Poodle dog eating noodles. Mr. Knox ends the game happily leaving a confused Mr Fox behind. 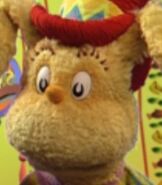 Add a photo to this gallery
Retrieved from "https://seuss.fandom.com/wiki/Mr._Knox?oldid=39020"
Community content is available under CC-BY-SA unless otherwise noted.