Oh Say Can You Say is a children's book written and illustrated by Theodor Geisel under the pen name Dr. Seuss, and published in 1979 by Random House. It is a collection of 25 tongue-twisters such as "Oh my brothers! Oh my sisters! These are Terrible Tongue Twisters!" This was Dr. Seuss's last beginner book.

This book was also used in the Random House Home Video Series which entitles "Dr. Seuss Beginner Book Video" along with two other books Hop on Pop and Marvin K. Mooney Will You Please Go Now! This book has an iOS and Android app by Oceanhouse Media. 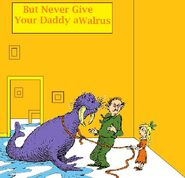 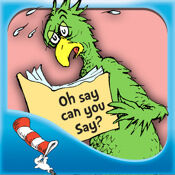 Add a photo to this gallery
Retrieved from "https://seuss.fandom.com/wiki/Oh_Say_Can_You_Say%3F?oldid=41764"
Community content is available under CC-BY-SA unless otherwise noted.