Oh, the Thinks you can Think!''' is also a book from Dr Seuss.

"Nobody, NOBODY can think up the think's that Dr. Seuss thinks."

This is a book Beginning Readers will love because, they'll find that the sentences are short and easy to read, and the rhymes are catchy and funny, and they'll be able to recongnize MOST of the words and the words they DON'T recongnize are the kind of wonderfully silly nonsensical words that only Dr. Seuss can think up. It's the kind of book that children will love to read -- and think about -- all by themselves.

This book was also used in the Random House Home Video Series which entitles "Dr. Seuss Beginner Book Video" along with two other books One Fish Two Fish Red Fish Blue Fish and The Foot Book. 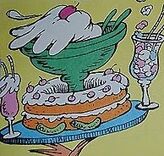 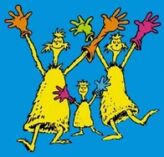 Add a photo to this gallery
Retrieved from "https://seuss.fandom.com/wiki/Oh_the_Thinks_you_can_Think!?oldid=41886"
Community content is available under CC-BY-SA unless otherwise noted.