Dr. Seuss Wiki
Register
Don't have an account?
Sign In
Advertisement
in: Characters, The Lorax, The Lorax Characters,
and 19 more

The Once-ler is the narrator of The Lorax and the the 2012 film adaptation of the same name. He is a greedy industrialist who cut down all of the beautiful, multi-colored Truffula Tree to make a peculiar garment known as a Thneed, 'a Fine-Thing-That-All-People-Need'.

One day, the Once-ler discovers a valley was full of beautiful Truffula Trees which the Bar-ba-Loots, Swommee Swans and Humming Fish inhabit. He decides to cut down one of the trees for his invention, the Thneed. When he chops down a Truffula Tree, he finds The Lorax in the tree trunk. He receives a warning about destroying the forest for his greedy plans. The Once-ler does not listen and continues to cut down trees to create Thneeds to sell.

As the Once-ler's small shop grows into a factory and new equipment is being made to keep up with the demand for more Thneeds, signs of damage to the Truffula Forest become evident to the Lorax. The Lorax first complains to the Once-ler that the Truffula trees, being chopped down, were also the food source of the Bar-ba-Loots who are now facing a terrible food shortage and a disease called "the Crummies" because of "gas and no food in their tummies." To save them, the Lorax sends them off to find another food source. At first, the Once-ler only shows a little remorse, but still focuses on expanding his business.

Soon, the Once-ler's Thneed-making business has expanded tenfold and now uses delivery trucks to take out the shipments. The Lorax eventually comes back complaining to the Once-ler that the factories are belching out so much "smogulous smoke" that it is giving the Swomee Swans sore throats, leaving them unable to sing. After the Lorax sends them off, he also complains to the Once-ler about his machinery making a goo by-product called "Gluppity Glup" and "Shloppity Shlop," and how it is being dumped into the ponds where the Humming-Fish live, leaving them unable to hum and forcing the Lorax to send them away too.

The Once-ler begins to see the light but Ms. Fun-cler calls Mr. Once-ler via a phone and informs him that Thneeds Inc.'s stock has risen 27 5/8 points and then dismisses the Lorax's pleadings and goes so far as to berate the Lorax for chastising his business practices and tells the Lorax is figuring on bigger-ing turning more Truffula Trees into Thneeds which everyone needs. The Lorax's complaints, however, unhappily prove to be true just as the last Truffula Tree gets chopped down. With all the trees gone, no more Thneeds can be made, so the Thneed factories close down and the Once-ler's family departs, leaving the Once-ler alone with the Lorax, who, looking back at the Once-ler sadly, picks himself up by the "seat of his pants" and floats away through a hole in the smog, leaving behind only a small pile of rocks with the word "UNLESS" inscribed into them.

The Once-ler alone remains, gazing upon the disintegrating ruins of his factories over the years and contemplating the meaning of this last message, perhaps with a sense of remorse. In the end, the Once-ler realizes what it means: unless someone who cares enough to make a difference comes along, things will either remain as they are, or worsen until it's too late. And so, he gives the boy the very last Truffula seed for him to plant and take care of.

The Once-ler lived with his mother, his brothers Bret and Chet, his uncle Ubb, and his aunt Grizelda. They all thought he would "result to nothing," so when the Once-Ler left to sell his invention, the Thneed, they were happy to laugh at his optimism. Even so, Once-ler continued on his journey to find the perfect material for his Thneed. After a while of being pulled in his fully loaded cart by his mule while playing songs on his guitar, he stumbles upon "the most beautiful place he had ever seen." The valley was filled with Truffula trees, Bar-ba-Loots, Swommee Swans and Humming Fish which had nothing against him.

As he chops down his first Truffula tree, the Lorax is summoned from thunder in the sky and forms in the tree stump. The Lorax warns him, but the Once-ler ignores his threats.

During the night of his arrival, while he is peacefully sleeping, the Lorax, with the help of the Bar-ba-Loots, the Swommee Swans, and the Humming-Fish, take his bed and shove him into the river. Unfortunately, their plan is ruined because one of the youngest Bar-ba-Loots found himself on the bed as well, but is unable to swim.

The Lorax saves the Bar-ba-Loot, Pipsqueak, as well as the Once-Ler and they make a deal. The Once-ler promises not to chop down any more Truffula trees, but in turn, the Lorax says he will keep an eye on him. As time passes, the Once-ler's Thneed gets discovered and goes into a high demand. In order to fufill that demand, the Once-ler calls his family to the valley to help him make the Thneeds. His mother demands him to start cutting down the trees to make production faster, and under the pressure, does so.

The Lorax calls the Once-ler on his broken promise, but the Once-ler cannot see what he did wrong. After his family arrived in the valley, the once happy and kind Once-ler disappears and is replaced with a greedy, money-crazed salesman. He denies that he has done anything wrong, but feels incredibly guilty to see the last of the Truffula trees being chopped down. All of the animals left and the Lorax picked himself up and rose away, leaving a rock with the word "unless" engraved in it. During the years, he stared at that word in his house, wondering what it meant. He told his story to a curious Ted Wiggins as well as gave him the last Truffula tree seed, righting his wrongs.

The 1972 television special depicts the Once-ler much like he appears in the book. However, the 2012 film depicts him as being human, a tall male with short black hair and light blue eyes.

During the beginning of the movie, he wears a gray fedora, a gray vest, a long-sleeved, white shirt; gray striped pants, and dark gray shoes. Additionally, he wears green gardening gloves.

Continuing through the story, his outfit switches to a black top hat with a green stripe, a long, green tailcoat (lighter green stripes on it), black pants, long green gloves, and as an accessory, simple sunglasses. He has a gold chain hanging from his coat to his pants, a black and green striped tie, a small Truffula tree-shaped flower in the collar of his coat, and black dress shoes.

The difference between this Once-ler and the one in the book is that instead of a total greedy person, he is a young, ambitious man who does not want to chop down all trees, but does so when his greedy lazy family convince him to do and the success gets to his head, and thinking the chopping down the trees is what's best for the company.

About to chop a tree 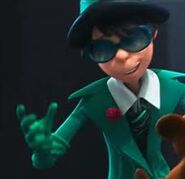 "How bad can I possibly be?"
Community content is available under CC-BY-SA unless otherwise noted.
Advertisement