Sam-I-Am is the main protagonist in Dr. Seuss' story Green Eggs and Ham and a supporting character in the second season of The Wubbulous World of Dr. Seuss. He is a short, unidentified Dr. Seuss creature. There is also a song in Seussical the Musical called Green Eggs and Ham, based off of him.

Sam-I-Am has become one of the most recognizable Seuss characters. He tries to convince Guy-Am-I to try the new dish called Green Eggs and Ham.

The origin of Green Eggs and Ham stems from a bet Seuss had with his publisher, Bennett Cerf. Seuss' previous book The Cat in the Hat, used only 223 words based off a list of 348 required words for beginner readers to learn. Cerf bet Seuss that he could not write a book with only 50 words from the aforementioned list.

While the creative process for Green Eggs and Ham was not as documented as Cat in the Hat, it is very possible that Sam's name came to be the same way the Cat in the Hat was created, with "Ham" rhyming with "Sam."

In Green Eggs and Ham, Sam pesters the unnamed co-star of the story asking if he likes the dish. He asks him to eat green eggs and ham with different partners and locations, each time refusing with: "I do not like them Sam-I-Am." At the end of the story, Sam finally tells his co-star to simply try the dish to see if he really likes it or not. To get Sam to leave him alone, the co-star does and finds that he actually really likes green eggs and ham.

The final line of the book is said by the co-star: "I do so like Green Eggs and Ham. Thank you, thank you, Sam-I-Am." Accompanied by an illustration of the co-star happily patting Sam on the shoulder, the only ounce of affection he has given Sam throughout the story.

The moral of Green Eggs and Ham has been criticized for themes of harassment and peer-pressure. Seuss enthusiasts, however, state that the book is a message of trying new things, and should not be thought of as such. It is because of this criticism that Sam-I-Am is widely regarded as a trickster with good intentions. He rarely ever gets angry at the co-star in the original book or any of its adaptations. On top of that, much like Cat in the Hat and the Fox in Socks, Sam-I-Am defies reality to a cartoonish level.

Sam-I-Am was voiced by Paul Winchell in the special Dr. Seuss on the Loose, Brian Lohmann in the Living games version, and John Kennedy in The Wubbulous world of Dr. Seuss.

All but Wubbulous World has portrayed Sam-I-Am as an indefinable, bug without antennas, with white face and feet and a hidden white body. He wears a red hat and a yellow shirt. In the original illustrations of the book, Sam seemed to change size, especially when he was next to his co-star. In Wubbulous World, he has a yellow face in place of a white face and an orange body.

Though changes have been made to Sam throughout the years, he has always been wearing his signature red hat. 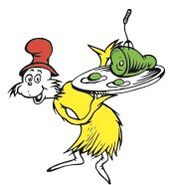 Sam-I-Am in the original book 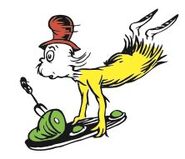 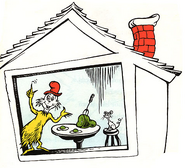 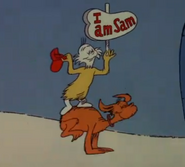 Sam-I-Am in Dr. Seuss on the Loose 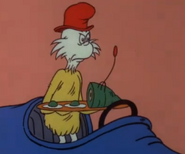 You will not escape

Sam-I-Am appearing from a chest 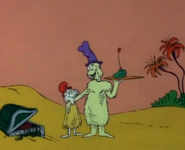 Thank you! Thank you, Sam-I-Am!

Sam I Am in "Living Books" 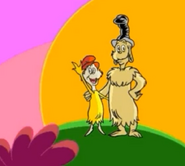 "You know Sam, this could be the beginning of a beautiful friendship." 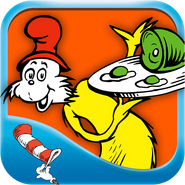