A yellow earless monkey who happens to be a "fix-it-up chappie" named Sylvester McMonkey McBean appears and offers the Sneetches without stars the chance to have them with his Green Star-On machine, for three dollars. The treatment is instantly popular, but this upsets the original star-bellied Sneetches, as they are in danger of losing their special status. McBean then tells them about his Star-Off machine, costing ten dollars, and the Sneetches who originally had stars happily pay the money to have them removed in order to remain special. However, McBean does not share the prejudices of the Sneetches, and allows the recently starred Sneetches through this machine as well. Ultimately this escalates, with the Sneetches running from one machine to the next.

He wears a green hat and a bowtie.

He appears on The Sneetches and Other Stories and Dr. Seuss on the Loose voiced by Bob Holt. 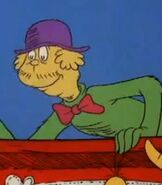 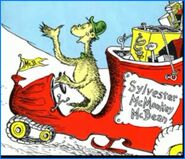 Add a photo to this gallery
Retrieved from "https://seuss.fandom.com/wiki/Sylvester_McMonkey_McBean?oldid=38408"
Community content is available under CC-BY-SA unless otherwise noted.