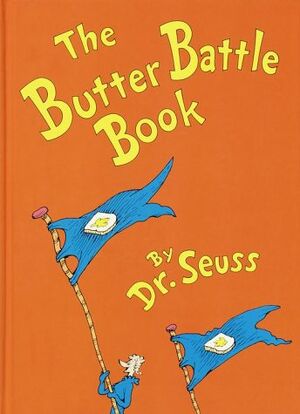 The Butter Battle Book is a rhyming story written by Dr. Seuss. It was published by Random House Books for Young Readers on January 12, 1984. It is an anti-war story; specifically, a parable about mutually assured destruction and nuclear weapons. The Butter Battle Book was a New York Times Notable Book of the Year.

This book was written during the Cold War era, and reflects the concerns of the time, especially the perceived possibility that all life on earth could be destroyed in a nuclear war. It can also be seen as a satirical work, with its depiction of a deadly war based on a senseless conflict over something as trivial as a breakfast food. The concept of a war based on toast is similar to the war between Lilliput and Blefuscu in Jonathan Swift's Gulliver's Travels, which was nominally based on the correct end to crack an egg.

The Yooks and the Zooks live on opposite sides of a long curving wall. The Yooks wear blue clothes; the Zooks wear orange. The primary dispute between the two cultures is that the Yooks eat their bread with the butter-side up, while the Zooks eat their bread with the butter-side down. The conflict between the two sides leads to an escalating arms race, which results in the threat of mutual assured destruction.

The race begins when a Zook patrolman named Van Itch slingshots the Yook patrolman's "Tough-Tufted Prickly Snick-Berry Switch" (a many-pronged whip). The Yooks then develop a machine with three slingshots interlinked, called a "Triple-Sling Jigger". This works once; but the Zooks counterattack with their own creation: The "Jigger-Rock Snatchem", a machine with three nets to fling the rocks fired by the Triple-Sling Jigger back to the Yooks' side.

The Yooks then create a gun called the "Kick-A-Poo Kid", loaded with "powerful Poo-A-Doo powder and ants' eggs and bees' legs and dried-fried clam chowder", and carried by a dog named Daniel. The Zooks counterattack with an "Eight-Nozzled Elephant-Toted Boom Blitz", a machine that shoots "high-explosive sour cherry stone pits". The Yooks then devise the "Utterly Sputter": a large blue vehicle intended "to sprinkle blue goo all over the Zooks". The Zooks counterattack with a Sputter identical to the Yooks'. Eventually, each side possesses a small but extremely destructive red bomb called the "Bitsy Big-Boy Boomeroo", and neither has any defense against it.

No resolution is reached by the book's end, with the generals of both sides on the wall poised to drop their bombs and waiting for the other to strike. The Yook patrolman's grandson (who had followed his grandfather to the wall) asks, "Who's gonna drop it? Will you or will he?" To which he replies, "Be patient. We'll see. We will see."

The Butter Battle Book was removed from the shelves of at least one Canadian public library during the Cold War because of the book's position regarding the arms race.[2][3]

An article in the July 27, 1984 issue of the conservative magazine National Review found it plausible that the book was not more popular because of Seuss' promotion of a theme of "moral equivalence", where the difference between the Soviet Union and the United States was equivalent to a disagreement over the proper side on which to butter bread.[4]

On the other hand, Roger S. Clark, a professor at Rutgers University School of Law, argued in an article in the New York Law School Law Review that "The Butter Battle Book ... captures the arms race and the development of weapons of war. ... The book struck such a chord with me when it came out in 1984 (which was also Seuss’s eightieth birthday). Something Orwellian about the timing! While its message is timeless, I suspect Seuss was well aware of the context he was writing in. It was a time when many people the world over, especially organizations of doctors and lawyers, were groping their way toward the massive civil society effort that led eventually to the advisory proceedings on nuclear weapons being brought through the World Health Organization (WHO) and the U.N. General Assembly."[5]

The story was adapted as a cartoon short in 1989. 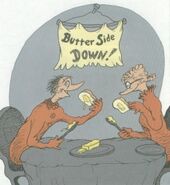 Add a photo to this gallery
Retrieved from "https://seuss.fandom.com/wiki/The_Butter_Battle_Book?oldid=43472"
Community content is available under CC-BY-SA unless otherwise noted.