The Cat in the Hat is an animated TV special based on the book of the same name.

When the story opens, it is too rainy and cold to play outside, so Conrad and his sister Sally sit bored and look out the window. Their mother announces her departure, tells them to have fun, and says she'll return at 3:30 sharp. While their mother is out at a job interview, they have no other choice but to wish they had something to do.

The mysterious, Cat in the Hat suddenly enters with a bump and fools around a bit. The family goldfish named "Carlos K. Krinklebine", demands that he must leave, but instead the Cat plays a game which he calls "Up, Up, Up, With a Fish", placing the fishbowl on top of a stack of bubbles. The girl notices that the Cat is making the house a little dirty, and the boy recalls their mother's return at 3:30. Noting their objections, the Cat bows to the voice of the majority and dejectedly states he's going to Siberia. Immediately after leaving, however, the Cat bursts back in claiming that his "moss-covered three-handled family gredunza" has been stolen. The Cat accuses Carlos of being the thief, and sings a ballad about the loss of his treasured keepsake.

The Cat then leads the kids on a search for the missing gredunza using his method of "Calculatus Eliminatus ", in which random numbers and letters are drawn anywhere the gredunza should be to mark that they have already checked there. This makes a mess of everything and Carlos once again demands that the Cat leave. Ostensibly to gain sympathy, the Cat sings a pessimistic song to convey his low self-esteem, then puts Carlos to sleep by singing a lullaby. Having made a miraculous recovery from his bout of depression, the Cat brings out Thing One and Thing Two to aid in the search for the gredunza, singing to the kids that they can find "anything under the sun". Instead of being productive, however, the things play a variety of sports using Mr. Krinkelbein's fishbowl, noting that every house they visit has a pessimistic fish. Carlos becomes angry and accuses the Cat of not being a real cat ("Whoever heard of a six foot cat?"), and his hat of not being a real hat. But the Cat indignantly asserts his legitimacy by singing his name in several languages, all of which are real and fictional. The song becomes so catchy that everyone, even Carlos, joins in and contributes, telling the Cat that in Russian he is a "chapka in a shlyapa" (An interesting point to note is that in the Russian portion of the song, the Cat describes himself as a "chapka in a shlyapa", which translates to "hat in a hat", in russian, the most common word for "cat" is "koschka").

As the song ends, Carlos spots the mother coming home. The Cat exits, leaving behind an extremely messy house. He quickly returns, however, using a motorized vehicle to tidy things up. He then departs for good, hinting that he may return someday. Just as he departs through the back door, the mother walks in through the front door; she asks the kids how their day was, and then tells them that she just saw a cat in a hat "going down the street with a moss-covered three-handled family gredunza". The exact identity of the object has never been revealed, but this indicates that the gredunza was never really lost, and the Cat simply wanted an excuse to have more fun. The kids look out the window much as they did at the beginning of the special, and watch as the Cat walks off to his next adventure.

NOTE: "Let Us All Sing", which is taken from The Cat in the Hat Song Book, was also sung, but there is no information about it in this cartoon.

The special was originally released as a VHS videocassette on the CBS/Fox Video label's Playhouse Video imprint in 1985, in a double feature along with Dr. Seuss on the Loose. Playhouse Video also reprinted the special individually on VHS in 1989. It was later released as part of the Dr. Seuss Sing-Along Classics release from 20th Century Fox Home Entertainment with CBS Video and Fox Kids Video in the mid 90's. It was later released on DVD by Universal Studios Home Entertainment on October 7, 2003. Warner Home Video released the special on Blu-ray and DVD on August 7, 2012. Bonus specials include Daisy-Head Mayzie and The Hoober-Bloob Highway.

The Cat in other TV specials

Although the original book's sequel did not receive an animated adaptation, the character went on to appear in several more Dr. Seuss specials. In 1973, there came Dr. Seuss on the Loose, where Allan Sherman reprised his role as The Cat in the Hat. Here, The Cat in the Hat appeared in bridging sequences where he introduced animated adaptations of three other Dr. Seuss stories: The Sneetches, The Zax and Green Eggs and Ham. In 1982's The Grinch Grinches the Cat in the Hat, the Cat in the Hat, now voiced by Mason Adams (Sherman had died shortly after Dr. Seuss on the Loose finished production), meets the title character of How the Grinch Stole Christmas! and sets out to reform his new green adversary. In 1995, the Cat appeared again, this time with the voice of Henry Gibson, to narrate Daisy-Head Mayzie, a special based on a posthumously published Dr. Seuss book. The Cat in the Hat appears as a guest in a 1996 video called Kids for Character. The following year, a puppet version of the Cat starred in The Wubbulous World of Dr. Seuss, where he was voiced by Bruce Lanoil and Steve Whitmire. The Cat in the Hat Knows a Lot About That!, an educational cartoon series based on the Random House Library series, premiered in September 2010. The Cat is voiced by Martin Short.

Differences from the Book 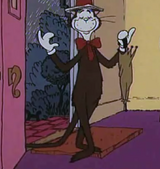 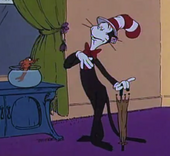 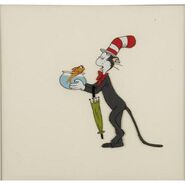 Add a photo to this gallery
Retrieved from "https://seuss.fandom.com/wiki/The_Cat_in_the_Hat_(1971_cartoon)?oldid=43950"
Community content is available under CC-BY-SA unless otherwise noted.