The Cat in the Hat (book)

The Cat in the Hat is a children's book by Dr. Seuss, featuring a tall, anthropomorphic, mischievous cat, wearing a tall, red and white striped hat. With the series of Beginner Books that The Cat inaugurated, Seuss promoted both his name and the cause of elementary literacy in the United States.[1] The eponymous cat appears in six of Seuss's rhymed children's books.

This book was also used in the Random House Home Video Series which entitles "Dr. Seuss Beginner Book Video" featuring "Maybe You Should Fly a Jet! Maybe You Should Be a Vet!"

In the Two Dr. Seuss Favorites, this book is featured after Green Eggs and Ham.

Theodore Geisel, writing as Dr. Seuss, created The Cat in the Hat in response to the May 24, 1954 Life magazine article by John Hersey, titled "Why Do Students Bog Down on First R? A Local Committee Sheds Light on a National Problem: Reading." In the article, Hersey was critical of school primers:

In the classroom boys and girls are confronted with books that have insipid illustrations depicting the slicked-up lives of other children. [Existing primers] feature abnormally courteous, unnaturally clean boys and girls. . . . In bookstores, anyone can buy brighter, livelier books featuring strange and wonderful animals and children who behave naturally, i.e., sometimes misbehave. Given incentive from school boards, publishers could do as well with primers.

Hersey's arguments were enumerated over ten pages of Life Magazine, which was the leading periodical during that time. After detailing many issues contributing to the dilemma connected with student reading levels, Hersey asked toward the end of the article:

Why should [school primers] not have pictures that widen rather than narrow the associative richness the children give to the words they illustrate — drawings like those of the wonderfully imaginative geniuses among children's illustrators, Tenniel, Howard Pyle, "Dr. Seuss", Walt Disney?

Dr. Seuss responded to this "challenge," and began work. His publisher supplied him with the sight vocabulary of 223 words, one that was in harmony with the words the child would be learning in school.

In an interview he gave in Arizona magazine in June 1981, Dr. Seuss claimed the book took nine months to complete due to the difficulty in writing a book from the 223 selected words. He added that the title for the book came from his desire to have the title rhyme and the first two suitable rhyming words that he could find from the list were "cat" and "hat". Dr. Seuss also regretted the association of his book and the "look say" reading method adopted during the Dewey revolt in the 1920s. He expressed the opinion that "... killing phonics was one of the greatest causes of illiteracy in the country."

The Cat in the Hat

In the first book featuring the character (The Cat in the Hat, 1957), the Cat brings a cheerful, exotic and exuberant form of chaos to a household of two young children one rainy day while their mother is out. Bringing with him two creatures appropriately named Thing One and Thing Two, the Cat performs all sorts of wacky tricks to amuse the children, with mixed results. The Cat's antics are vainly opposed by the family pet, who is a sentient and articulate goldfish. The children (Sally and her older brother, who serves as the narrator) ultimately prove exemplary latchkey children, capturing the Things and bringing the Cat under control. He cleans up the house on his way out, disappearing seconds before the mother arrives.

The book has been popular since its publication, and a logo featuring the Cat adorns all Dr. Seuss publications and animated films produced after Cat in the Hat.

Seuss wrote the book because he felt that there should be more entertaining and fun material for beginning readers. From a literary point of view, the book is a feat of skill, since it simultaneously maintains a strict triple meter, keeps to a tiny vocabulary, and tells an entertaining tale. Literary critics occasionally write recreational essays about the work, having fun with issues such as the absence of the mother and the psychological or symbolic characterizations of Cat, Things, and Fish. This book is written in a style common to Dr. Seuss, anapestic tetrameter (see Dr. Seuss's meters).

The story is 1626 words in length and uses a vocabulary of only 223 distinct words, of which 54 occur exactly once and 33 twice. Only a single word – another – has three syllables, while 14 have two and the remaining 221 are monosyllabic. The longest words are something and playthings.

The Cat in the Hat has gone on to sell 7.2 million copies in the United States alone (up to 2000), making it the 9th best-selling hardcover children's book of all time.

The Cat in the Hat made a return appearance in this 1958 sequel. He returns to the Walden's house where Conrad and Sally are seen working in the snow with shovels not having time for the Cat's bad tricks again. On this occasion, he leaves Thing One and Thing Two at home, but does bring along Little Cat A, nested inside his hat. Little Cat A doffs his hat to reveal Little Cat B, who in turn reveals C, and so on down to the microscopic Little Cat Z, who turns out to be the key to the plot of the problems being solved. The crisis involves a pink bathtub ring and other pink residue left by the Cat. So the Little Cats from the Big cat's hat are working hard. At the end, during little Cat Z's vooming process all the cats are blown back into the the Cat's magical hat.

The book ends in a burst of flamboyant versification, with the full list of little cats arranged into a metrically-perfect rhymed quatrain. It teaches the reader the alphabet.

Little Cats A, B and C were also characters in the 1996 TV series The Wubbulous World of Dr. Seuss.

The Cat in The Hat Comes Back was part of the Beginner Book Video series along with There's a Wocket in my Pocket! and Fox in Socks.

Adrian Edmondson narrated both Cat in the Hat stories for a HarperCollins audiobook that also includes Fox in Socks and Green Eggs and Ham.

Springing from this series of beginning readers were such standards as A Fly Went By (1958), Sam and the Firefly (1958), Green Eggs and Ham (1960), Go, Dog. Go! (1961), Hop on Pop (1963), and Fox in Socks (1965), each a monument in the picturebook industry, and also significant in the historical development of early readers. All are still in print and remain very popular over forty years after their initial publication.

Creators in the Beginner Book series were such luminaries as Jan & Stan Berenstain, P. D. Eastman, Roy McKie, and Helen Palmer (Mr. Geisel’s wife). The Beginner Books dominated the children’s picturebook market of the 1960’s, and still plays a significant role today within the phases of students’ reading development. The early success of Beginner Books, both from a commercial and learn-to-read perspective, initiated the blurring between educational and entertainment books.[3]

At the end of each book, after the Cat in the Hat's teaching is done, there is a glossary on some of the words used, an index, and a list of suggested books, from other publishers, that cover the topic each book covered.

While the illustrators leave the original outfits of Dick and Sally intact, they've made changes to Thing 1 and Thing 2. In the original "The Cat in the Hat" book and the special, Thing 1 and Thing 2 had plain white skin and blue hair and wore red sleepers. In "The Cat in the Hat's Learning Library," the illustrators have changed the Things' appearance so that they have pink skin and yellow hair and wear blue sleepers.

See list of The Cat in the Hat's Learning Library books

The Cat in the Hat Knows a Lot About That!

The Wubbulous World of Dr. Seuss

Dr. Seuss' The Cat in the Hat

Seussical the Musical is a musical that combines different Dr. Seuss stories together. The Cat In The Hat plays the narrator, as well as a few minor characters.

Living Books has created an educational CD game of the story, guided by animated characters. Software MacKiev brought this electronic version of the book to the Mac OS X.

A ride was built based upon the book in Seuss Landing in Islands of Adventure in 1999.

You can listen to the audio-book here: https://www.youtube.com/watch?v=XhqsfkXTcH8

You can read the book online here: https://www.youtube.com/watch?v=vc8E5qMAtMA

Quoted in the U.S. Senate

In the 110th Congress, Senate Majority Leader Harry Reid compared the impasse over a bill to reform immigration with the mess created by the Cat in The Cat in the Hat. He read lines of the book from the Senate floor, quoting "'That is good,' said the fish. 'He's gone away, yes. But your mother will come. She will find this big mess.'"[5] He then carried forward his analogy hoping the impasse would be straightened out for "If you go back and read Dr. Seuss, the cat manages to clean up the mess."[6] Reid's hopes did not come about for as one analyst put it "the Cat in the Hat did not have to contend with cloture."[5]

Film and other appearances

In the Tom Clancy film Patriot Games (1992), Jack Ryan visits his daughter, Sally, in her hospital room and reads to her from The Cat in the Hat, which features a character named Sally: "I sat there with Sally." Later, he is reading it by himself in the hospital cafeteria, when Provisional Irish Republican Army (PIRA) leader Paddy O'Neill walks in with a gift for Ryan.

The book makes a cameo appearance in the Nick Jr. show Wonder Pets intro where it can be seen between the books. Also when Tuck is swimming.

All were published by Random House. The original edition was a joint publication with Houghton Mifflin.

According to the Children's Picturebook Price Guide, 2006-2007 edition, The first edition Cat In The Hat has an estimated market value of $4000.

Goofs, Errors, and Corrections of the book and video 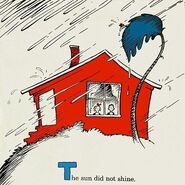 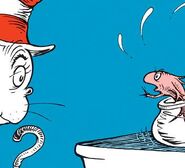 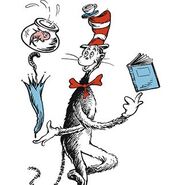 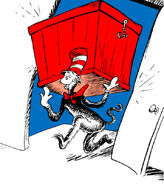 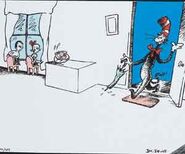 No More of the pictures from this video coming soon. Stay tuned.