The Cat in the Hat is a a tall anthropomorphic cat, who wears a red and white-striped hat and a red bow tie and sometimes has an umbrella with him mostly green, blue or red.

He is a farm cat of Dr. Seuss's short story The Cat in the Hat. With his book being an overwhelmingly successful best-seller, the Cat in the Hat has become a logo for Random House's beginner books, the production logo for all of Seuss's animated shorts, and Dr. Seuss's most popular character worldwide.

Films and direct to video programs

There are times The Cat himself can be part time magician for he is somewhat a Cat that can do magic tricks with his hat or with something else. He is also a Musician for he is known to play a Lute, Trombone and mainly Piano and he is good at singing. He himself also loves to read.

He sometimes would carry an umbrella with him either the color green or blue. He owns an orange umbrella he uses to fly himself around the town and travel as seen in Daisy-Head Mayzie. He has also took a passenger named Mayzie McGrew with him on flight to bring her back home to her friends and family.

Thing One and Thing Two

The Cat is six feet tall, according to the original cartoon, the size of an average man. He is lean for the most part but has a stomach that sticks out like most Seuss characters. He wears white gloves, a red tie, and, of course, his signature red and white top hat.

What has changed about the Cat the most over all his adaptations are his markings. In all adaptations, he has a white face that either stops at the neck or goes down. His stomach on the other hand changes. The original short gives him an all black stomach as does I can read with my eyes shut, however, Daisy Head Mayzie and The Cat in the Hat knows a lot about that both give him a white stomach. Grinch Grinches the Cat in the Hat is especially unusual as his design goes, as his stomach is a dark gray. [1]

An article by John Hersey about literacy in early childhood provided inspiration for The Cat in the Hat.

Theodor Geisel, writing as Dr. Seuss, created The Cat in the Hat partly in response to the May 24, 1954, Life magazine article by John Hersey titled "Why Do Students Bog Down on First R? A Local Committee Sheds Light on a National Problem: Reading" In the article, Hersey was critical of school primers like those featuring Dick and Jane:

After detailing many issues contributing to the dilemma connected with student reading levels, Hersey asked toward the end of the article:

This article caught the attention of William Spaulding, who had met Geisel during the war and who was then the director of Houghton Mifflin's education division. Spaulding had also read the best-selling 1955 book Why Johnny Can't Read by Rudolf Flesch. Flesch, like Hersey, criticized primers as boring but also criticized them for teaching reading through word recognition rather than phonics. In 1955, Spaulding invited Geisel to dinner in Boston where he proposed that Geisel create a book "for six- and seven-year olds who had already mastered the basic mechanics of reading". He reportedly challenged, "Write me a story that first-graders can't put down!"

At the back of Why Johnny Can't Read, Flesch had included 72 lists of words that young children should be able to read, and Spaulding provided Geisel with a similar list.> Geisel later told biographers Judith and Neil Morgan that Spaulding had supplied him with a list of 348 words that every six-year-old should know and insisted that the book's vocabulary be limited to 225 words. However, according to Philip Nel, Geisel gave varying numbers in interviews from 1964 to 1969. He variously claimed that he could use between 200 and 250 words from a list of between 300 and 400; the finished book contains 236 different words.

Theodor Geisel created The Cat in the Hat in response to May 24, 1954, Life magazine article by John Hersey, titled "Why Do Students Bog Down on First R? A Local Committee Sheds Light on a National Problem: Reading.” In the article, Hersey was critical of school primers:

In the classroom boys and girls are confronted with six books that have insipid illustrations depicting the slicked-up lives of other children. Primers feature abnormally courteous, unnaturally clean boys and girls. In bookstores, anyone can buy brighter, livelier books featuring strange and wonderful animals and children who behave naturally, i.e., sometimes misbehave. Given incentive from school boards, publishers could do as well with primers.

Hersey’s arguments were enumerated over ten pages of Life magazine. After detailing many issues contributing to the dilemma connected with student reading levels, Hersey asked toward the end of the article:

Why should school primers not have pictures that widen rather than narrow the associative richness the children give to the words they illustrate? Drawings like those of the wonderfully imaginative geniuses among children’s illustrators, Tenniel, Howard Pyle, "Seuss", and Walt Disney?

Ted Geisel's friend William Ellsworth Spaulding, who was then the director of Houghton Mifflin's education division, invited Geisel to dinner in Boston and "proposed” that Ted writes and illustrate such a book for six- and seven-year-olds who had already mastered the basic mechanics of reading. “Write me a story that first-graders can't put down!" he challenged. Spaulding supplied Geisel with a list of 348 words that every six-year-old should know, and insisted that the book's vocabulary be limited to 225 words. Nine months later Dr. Seuss finished The Cat in the Hat, which used 223 words that appeared on the list plus 13 words that did not. Because Geisel was under contract with Random House, Houghton Mifflin retained the school rights to The Cat in the Hat and Random House retained the rights to trade sales. In an interview he gave in Arizona magazine in June 1981, Dr. Seuss claimed the book took nine months to complete due to the difficulty in writing a book from the 223 selected words. He added that the title for the book came from his desire to have the title rhyme and the first two suitable rhyming words that he could find from the list were "cat" and "hat". Dr. Seuss also regretted the association of his book and the "look-say" reading method adopted during the Dewey revolt in the 1920s. He expressed the opinion that "Killing phonics was one of the greatest causes of illiteracy in the country."

The Cat in the Hat is Seuss’ most famous and most popular character, followed by the Grinch and Horton the elephant. Because his book has become such a landmark in children’s literature he has been made into the mascot of Random House. The Cat in the Hat emblem has been featured in most every book published by the company since the character’s debut. “The Cat in the Hat Productions” was also the name of the production company that animated the Dr. Seuss specials from 1966 to 1989, the Cat in the Hat, of course, being the mascot as well.

A statue of the cat stands next to Theodor Giesel in his memorial. 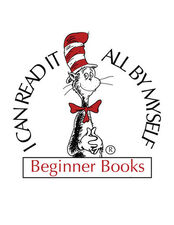 Dr. Seuss The Cat in the Hat

I Can Read with My Eyes Shut! part 1

I Can Read with My Eyes Shut! part 2
Retrieved from "https://seuss.fandom.com/wiki/The_Cat_in_the_Hat_(character)?oldid=41148"
Community content is available under CC-BY-SA unless otherwise noted.