From the title theme of The Cat in the Hat Knows a Lot About That!

The Cat in the Hat Knows a Lot About That! is a children's animated television series currently airing on PBS Kids in the United States. Based on an earlier property, The Cat in the Hat's Learning Library, it focuses on the adventures of the children Sally and Nick, who go on adventures in learning with The Cat in the Hat and his pal, Fish, via a magical device called the Thinga-ma-jigger. Along the way, they are also assisted by The Cat's helpers, Thing One and Thing Two, which would usually say bad words. In Canada, the series is broadcast on Treehouse TV, which also serves as a production company for the program. The program is presented in widescreen and high-definition, where available.

The program focuses on teaching children about the natural world around them, from the changing of the seasons to plant and animal life. There is also a focus on general pro-social lessons, such as working together as a team and behaving fairly towards others.

The Cat in the Hat Knows a Lot About That! is an American/Canadian/British animated television series that premiered August 7, 2010 on Treehouse TV in Canada and on PBS Kids in the US and also in the UK on CITV and Cartoonito. The series is based on Random House’s Beginner Book franchise, The Cat in the Hat’s Learning Library, and is developed by Portfolio Entertainment, Random House Children Entertainment and Collingwood O’Hare Productions. The first season has 40 half-hour episodes. PBS Kids has renewed it for a second season of 20 episodes currently premiered on September 10, 2012. The series ended on October 14, 2018.

Each episode features The Cat in the Hat (voiced by Martin Short), who leads six-year-old neighbours Nick and Sally, the Fish, and Thing One and Thing Two on a variety of adventures in his "Thinga-ma-jigger", a Seussian contraption that can sprout wings, pontoons, booster rockets, change size, and do just about anything else necessary to further the adventure. The adventures are prompted by a question posed by either Nick or Sally at the beginning of each episode, which will inevitably lead them around the globe to "make natural science discoveries." Similar to other PBS Kids series such as Curious George and Sid the Science Kid, The Cat in the Hat Knows a Lot About That! focuses on introducing preschoolers to various science and learning concepts.

Hey? What! Come over here
The Cat in the Hat is about to appear
He's coming over to whisk you away
On a fabulous journey today


He's coming!
And now he's arrived
In the thingamajigger, the thing that drives
He's a cat and he's oodles of fun
With his hairy helpers
Thing Two and Thing One

List of The Cat in the Hat Knows a Lot About That! Episodes

Gallery of Animals from the Series

A giant anteater snuffling for ants on a tree

A robin feeding a worm to her three babies

A mutt sitting on its hind legs

A peacock showing off

Three beavers gnawing on a tree

A grizzly trying to catch a salmon

A striped skunk vs an American black bear

A flock of flamingos

A mob of Meerkats

A giraffe racing a plains zebra

A West Indian Manatee and her calf

A European rabbit and three kittens

A golden hamster and her baby

A saltwater crocodile carrying her babies

A red squirrel dining on a strawberry

Baloonfish and a Reef Squid 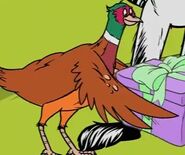 A Beeeater Making tracks in mud

A Turkey, neer it's nest

A King Parrot,Lokking inside it's holl

a Sandgrouse feeding it's babys 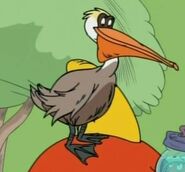 A Pelican sitting on the [Thinga-ma-jigger] 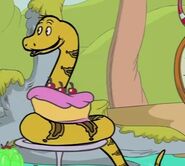 A snake with a cake

Two anglerfish
Add a photo to this gallery

Retrieved from "https://seuss.fandom.com/wiki/The_Cat_in_the_Hat_Knows_Alot_About_That!?oldid=41869"
Community content is available under CC-BY-SA unless otherwise noted.