The Glunk That Got Thunk is a story from the book I Can Lick 30 Tigers Today! and Other Stories. It is narrated by The Cat in the Hat's son.

It begins with the Cat in the Hat's daughter doing one of her favourite after-dinner activities: sitting in her room thinking up fuzzy creatures with her "thinker-upper". When she gets bored, she uses her thinker-upper to "thunk" up a creature called a Glunk that is dirty. The Glunk then gets on the phone to his mother and starts discussing an obscure stew recipe but racks up a phone bill of $300 and requests that the young cat pay. When she tries to use her 'un-thinker" to "un-thunk" him, he says it's impossible. Eventually, she tries unsuccessfully to un-thunk him but cannot, that is, until her brother finds her and they un-thunk him together. The brother then gives her a talking-to and she promises to only think up the fuzzy creatures. 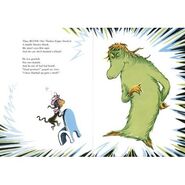 Add a photo to this gallery
Retrieved from "https://seuss.fandom.com/wiki/The_Glunk_that_Got_Thunk?oldid=30342"
Community content is available under CC-BY-SA unless otherwise noted.
FandomShop DC Trivia GalaxyQuest