The Grinch is the titular main protagonist from the book and television special, How the Grinch Stole Christmas! and the anti hero of its film adaptation of the same name as the 1966 special and book. He is the resident grouch of Whoville, living high above the Whos on Mount Crumpit with his dog Max and usually spies on them. The Grinch is a Who-hater (except for the ending of the special, where he changes character completely). The Grinch appeared in Seussical the Musical, portrayed by Patrick Page. In 2000, Jim Carrey portrayed the Grinch in Dr. Seuss' How The Grinch Stole Christmas. In the 2018 CGI animated movie The Grinch, the Grinch was portrayed by Benedict Cumberbatch. He once hated Christmas and his heart used to be two sizes too small.

The Grinch is second only to The Cat in the Hat in terms of popularity of Dr. Seuss's characters.

After putting up with Christmas for fifty-three years, the Grinch puts his foot down and took the Whos' Christmas away from them by disguising himself as Santa Claus. When he was robbing the first house, the Grinch was spotted by Cindy-Lou Who, who got out of bed and asks him "Why are you taking our Christmas tree?" So, the Grinch lies that one of the lights on Cindy's tree was not working right and is taking it to the workshop to get it fixed. When Cindy goes back to bed, the Grinch continues the heist. Later, he saw the error of his ways after seeing that Christmas was more than the presents associated with them and brought everything back to Whoville. He even carved the Roast Beast personally.

Seuss first used the word "Grinch" in 1953 to describe a bird called the Beagle-Beaked-Bald-Headed Grinch in his book Scrambled Eggs Super!

The Hoobub and The Grinch

The Grinch first appeared in the short story The Hoobub and the Grinch, which was originally published in the May 1955 edition of a Redbook magazine. Unlike later incarnations, the Grinch is a yellow colored creature who cheerfully tricks the Hoobub into buying a piece of green string by convincing him that the string is worth more than the Sun. It is later revealed that Grinches often tricked Hoobubs into buying worthless items on a regular basis.

The Grinch appears as the main antagonist in the How The Grinch Stole Christmas TV special and takes away the Whos' Christmas from them like he did in the book, but eventually brings it back in the end. He was voiced by the late Boris Karloff, who was best known for his roles in old horror films.

How The Grinch Stole Christmas (Film)

This film loosely follows the book and TV Special but is more of a hermit who just wants peace and quiet. The film also introduces a reason to why he hates Christmas, giving him a tragic backstory. He was portrayed by Jim Carrey in the film.

The Grinch Meets His Max (Book)

The Grinch appears in The Grinch Meets His Max with an itch that will not go away. A dog named Max comes to play with him but he refuses. He tries to get away from Max but fails. Later, Max scratches the itch; he and The Grinch become best friends and lives with him on Mt. Crumpit.

The Grinch appears in Halloween is Grinch Night as the main villain once again, although it is a prequel this time. He plans on coming down to Whoville because of a sour-sweet wind that blows. He has three encounters with the young Who named Euchariah who pretends he is not scared of The Grinch. The Grinch and his dog Max bring the Paraphernalia Wagon down to Whoville. The wagon is filled with monsters called The Unhuman Race. Euchariah tries to stall the Grinch by getting the Grinch to scare him more and unwittingly causes the Grinch to unleash his entire Paraphernalia upon him. After this, the sour-sweet winds dies down, ending the Grinch Night. The Grinch is sent back to his cave in the end, but The Grinch promises to return on another Grinch Night, knowing the wind will come back. In this prequel, he was voiced by the late Hans Conried, who is best known for voicing Captain James Hook and Mr. Darling in Walt Disney's 14th animated masterpiece of 1953, Peter Pan, Lord Duke and the model reference of King Stefan in Disney's 16th animated masterpiece of 1959, Sleeping Beauty, and as Snidley Whiplash in Dudley Do Right.

The Grinch Grinches The Cat In The Hat

The Grinch later appears in The Grinch Grinches the Cat in the Hat as the main antagonist once again. He meets the Cat in the Hat for the first time. In the beginning, he is happy until his Grinch Reflection turns him back into himself. He ruins the Cat's day by using a device called the Vackusound Sweaper, which makes him able to make anyone make any sound he wants. He also invented the darkhouse which makes things so dark you cannot see a glove in front of you. Near the end of the special, The Cat In The Hat goes to a cafe but the Chef who works there asks him if he wants some food. The Cat was just trying to get away from The Grinch but The Grinch made trouble in the café as well. The Cat and the other people sing to The Grinch about his mother, and The Grinch turns nice again. For this special, he was voiced by the late Bob Holt, who is best known for his voice role as the Hulk in the animated series of the same name and as Homer Zuckerman in Charlotte's Web.

The Wubbulous World Of Dr. Seuss

The Grinch appears in The Wubbulous World of Dr. Seuss as a secondary villain in season 1 and a recurring villain in season 2. He is the main antagonist of the Seussville segments. He was portrayed by Anthony Asbury who is best known for his Muppets roles and is the only voice actor of the character to still be alive.

Horton Hears A Who!

The Grinch appears as a cameo in both Horton Hears a Who! installments.

The Grinch appears in the 2018 computer-animated film remake as the main character and protagonist. He was voiced by Benedict Cumberbatch. Just like the 2000s movie, this movie gives him another tragic backstory where he was a lonely orphan who never had the chance to celebrate Christmas with others.

The Grinch has a small role in Seussical the Musical He was portrayed by Patrick Page.

The Grinch is an unpleasant "Who-hating" grouch with a wicked temper, sour attitude, depressed judgment, and a heart about two sizes too small (the only exception to this is the end of How the Grinch Stole Christmas!, where he becomes whole-hearted and loving), and is always out to ruin something. In Grinch Night, he is shown to have been sadistic, chasing an endangered animal about while lashing his whip at it, which shocks even the Whos, who believed the creature would have some sort of immunity. In Grinch Night, the Grinch is far more menacing, and the Whos are shown to actively fear him.

He comes down to Whoville only on holidays, which we see in two of the three TV specials, which are holiday-based. However, in How the Grinch Stole Christmas!, he is opposed to the holiday and comes down to sabotage it. In Grinch Night, he comes down to waltz around for Grinch Night to torment the town. Grinch Night, despite the title claiming it to be Halloween, appears to be a randomly occurring event signaled by the coming of the Sour Sweet Wind. This signals all the Whos to annually lock down their homes.

The Grinch's only friend is his pet dog, Max, a big-eyed pooch who is loyal to his master despite the Grinch treating Max like a servant. Max also is an unwitting accompany in the Grinch's plots. The Grinch forces him to masquerade as a "reindeer" by attaching a crooked pair of antlers on his head and making Max pull the sleigh with all the Whos' Christmas goodies inside.

He is seen to give up his evil reputation and actually become important (or more important) to Whoville.

In the live-action film, his behavior is more over-the-top. In the movie, he is portrayed as having a reputation similar to Bigfoot, although in his case, he is known to exist. This version of the Grinch also holds a grudge against the Mayor of Whoville, who had bullied him as a child in school and winning the heart of his childhood crush, Martha May Whovier.[1]

In the CGI animated film, The Grinch is slightly nicer - while still rude and mean to the citizens of Whoville - and has a soft spot for animals, especially Max. He believes that the Whos are all greedy and only think about themselves, which adds to his hatred of Christmas. While still a loner, this Grinch goes to Whoville to buy groceries, although he hates the town and its residents. He is also slightly clumsier than his original counterpart and after his inevitable change of heart, he is shown to be socially awkward around others, mostly because of his guilt and because his only companions were Max and a reindeer named Fred up to that point.

The Grinch has a large potbelly, long fingers and long feet, a pear-shaped body (much like the Whos), yellow teeth and is covered in green hair. He has red pupils and yellow eyeballs. He has large, sinister black eyebrows, and deep lines on his forehead. His mouth lines are subtle when he is in a neutral mood, yet very stretched when he is grinning. He has a pair of brooding, deep-set, soulless eyes, like a fish with red irises - although they are noted to become rounder and white and feature blue irises after the Grinch's "conversion". In the book, his eyes are red-pink with black irises, while in the movie, they are yellow with black irises.

Since "Halloween Is Grinch Night", his eyes are still yellow with now green irises and red pupils. Another physical characteristic noted to change after the Grinch learns the true meaning of Christmas is his face, which in addition to the line softening mentioned above, becomes somewhat heart-shaped as he smiles broadly. A long neck is prominent, with layers of green fur coming down it.

He seems to have pockets in the fur of his large stomach, as he rests his hands inside this area. With regard to posture, he is loose and can bend easily.

Exclusive to the Live Action Film

In the live action film, he stands 1.75 to 6'6" to 2.14 meters. His fingers and feet look longer due to the long portions of hair coming off of them.

Exclusive to the CGI Animated Film

In the CGI animated film, the Grinch has lighter, cleaner fur and is taller and more slender compared to his original version. He has buck teeth and normal eyes with green irises.

On at least two occasions, the Grinch has demonstrated above-average (even superhuman) strength, but it is stated this is unusual and that he found "the strength of forty-seven grinchman"

He is also a skilled craftsman, engineer, and quantum physicist, having built his sleigh and many of the contraptions within his cave himself, and many contraptions in The Grinch Grinches The Cat in The Hat.

In Halloween is Grinch Night, he is shown to be able to make his eyebrows fly off of his face and attack Euchariah while singing a chant. He was also able to contain many nightmarish creatures within his wagon at some point before the special, and then release them in the special. 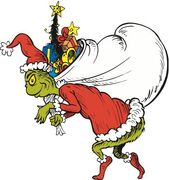 The Grinch and his dog Max 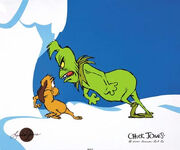 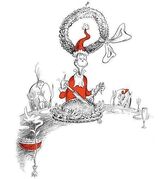 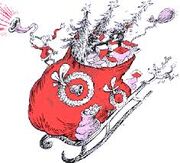 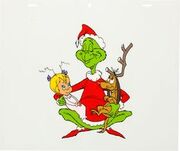 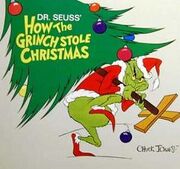 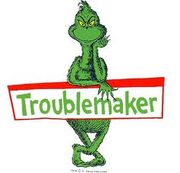 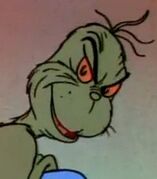 The Grinch remembers his mother. 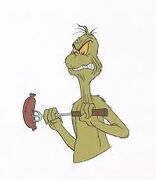 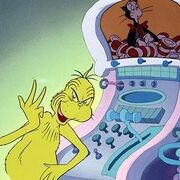 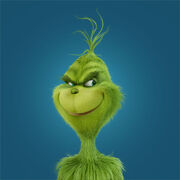 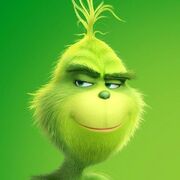 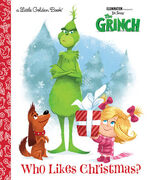 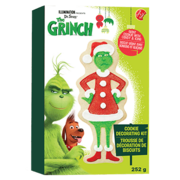 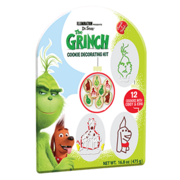 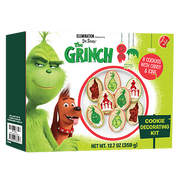