The Grinch Grinches the Cat in the Hat is an animated television special and crossover starring two of Dr. Seuss' famous characters, The Grinch and The Cat in the Hat. It premiered on May 20, 1982 on ABC and won two Emmys. This is to date, the last Dr. Seuss special from DePatie-Freleng. This was not only Marvel's lone Dr. Seuss special, this was also the only Marvel Productions cartoon that Friz Freleng was involved in.

Opening on a morning so beautiful that even the Grinch wakes up in a good mood. But his cheerfulness is soon changed when his reflection in the mirror (possibly an envisionment of his father) talks back to him and reminds him that he's a Grinch and therefore shouldn't be cheerful – by repeating the Grinch's Oath with him:

“A Grinch's unhelpful, unfriendly, unkind, with ungracious thoughts, in an unhealthy mind. A Grinch's uncheerful, uncouth, and unclean. Now say this together: I'M FRIGHTFULLY MEAN! My eyes are both shifty, my fingers are thrifty. My mouth won't smile, not half of an inch! I'm a Grinch! I'm a Grinch. I'M A GRINCH!”

Out to prove himself to his reflection,the Grinch goes out to cause misfortune. Meanwhile, the Cat in the Hat goes on a picnic and soon crosses paths with the Grinch when the Grinch crashes into his car. The Grinch demands that the Cat "get this crate out of my way", but when the Cat willingly and cheerfully agrees to his demands, the Grinch pursues him in a car chase for mistakenly calling him 'Mr. Green-Face'. Realizing he's upset this person, the Cat decides to go back to his house, but the Grinch tracks him there and messes with his voice using a device he has invented the Acoustical Anti Audio Bleeper ("AcousticaAntAudiBleepe"), otherwise known as the Vaccuum Sound Sweeper ("VaccuuSounSweepe"), a machine that sucks out of the air every noise; every sound, and garbles sound waves of noises and sounds of anything that gets sucked in it for 50 miles around. He's undeniably proud of his invention as he sabotages all other nearby sounds, proclaiming himself the 'The Puzzler and Master of Everyone's Ears'. Then the Grinch goes back to his house and builds a "Darkhouse" with which to mess with the Cat's sight, proclaiming, "That Cat's gonna suffer like never before! Ha-ha-ha-ha-ha-ha-ha-ha...!"

The Cat becomes upset with the Grinch's pranks and has a psychiatry session with him in a thought bubble. Predictably he gets nowhere with the virtual Grinch, so he then decides to go over and have a talk with him, but in the process, the Grinch makes it so dark he can't see where he's going, and he crashes his car. The Cat attempts to hide from the Grinch in a nearby restaurant, but the Grinch's machine continues to mess with reality, and his tricks cause michief all over the restaurant. The Cat's now furious with the Grinch and ponders to himself how he can change the Grinch, eventually racing through a door and sending himself hurtling into the Grinch's Dimension. There, as he ponders, he has to endure visions of a floating Grinch head of laser lights, a spinning spiral, and getting split into 4 different-colored outlines - blue, green, red, and yellow, which join together to become a white outline, and he turns back into himself. He soon figures it out and rallies everybody in the restaurant to follow him to the Grinch's house. There, he sings a song about the love the Grinch received from his mother while using his umbrella as a conductor's baton. It's unknown what became of him after this.

The Grinch, having a soft spot for his mom, bursts into tears when he hears this, and is afterward told by the spirit of his mom that "everything's going to be all right." Touched, the Grinch disassembles his machines and goes through his change of heart again the next morning. But when his reflection tries to revert him back to a grouch, his dog Max shuts the mirror up with the Vaccuum Sound Sweeper. 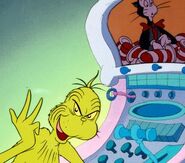 Retrieved from "https://seuss.fandom.com/wiki/The_Grinch_Grinches_the_Cat_in_the_Hat?oldid=43897"
Community content is available under CC-BY-SA unless otherwise noted.