Dr. Seuss Wiki
Register
Don't have an account?
Sign In
Advertisement
in: Dr. Seuss Books, The Lorax, Six by Seuss

A young boy visits a strange, isolated man called the "Once-ler", who lives "on the far end of town where the Grickle-grass grows...[on] the Street of the Lifted Lorax" to learn why the area is in such a run-down state. Through a "whisper-ma-phone," the Once-ler tells the boy what happened. When the Once-ler first arrived at this place, it was a beautiful, pristine valley containing happy, playful fauna (Swomee-Swans, Humming-Fish, and Brown Bar-ba-loots) that spent their days romping around blissfully among "Truffula trees", colorful woolly trees that spread throughout the area.

Enchanted by these gorgeous trees, the Once-ler built a small shop, where he chopped down a tree and knitted a Thneed, an odd-looking but versatile invention of his, that he insisted "everyone needs." By cutting down the tree, however, he summoned the titular Lorax to appear from the stump of a Truffula tree. He "speaks for the trees, for the trees have no tongues" and warned the Once-ler of the consequences of cutting down the Truffula trees. But the Once-ler ignored him, instead calling his relatives to come and work in his factory.

As the Thneed industry kept expanding, the once beautiful area became choked with pollution, and the Lorax sent away the fauna to find more hospitable habitats. (First, the Brown Bar-ba-loots, which fed on Truffula fruits, were starved. Then the pond that was home to the Humming Fish was filled with toxic waste that clogged their gills. Finally the "smogulous smoke" filled the Swomee Swans's throats with smog, preventing them from singing.) Finally disgruntled by the Lorax, the Once-ler declared his intention to keep expanding his operations. But at that very moment, they heard the very last Truffula tree get cut down. Without raw materials, his factory shut down; without the factory, his relatives left. Then the Lorax, silently, with one "sad backward glance", lifted himself by his posterior and flew away through the clouds.

The Once-ler lingered on in his crumbling residence where he dwelt in great distress, and he pondered over a message the Lorax left behind: a stone slab etched with the word "Unless". In the present, he now realizes that the Lorax meant that unless someone cares, the situation will not improve. The Once-ler then gives the boy the last Truffula seed and tells him to plant it, saying that if the boy grows a whole forest of the trees, "the Lorax, and all of his friends, may come back".

The book has strong environmental themes, especially regarding issues such as deforestation, air, and water pollution. It also speaks strongly against greed, and the capitalist system.

On July 28, 2009, it was announced that Universal Studios and Illumination Entertainment were teaming up to produce a 3-D, CGI film based upon the book. It was be co-directed by Chris Renaud, Cinco Paul and Ken Daurio, with Paul & Daurio writing the script. Mike Fleming writes in Variety that "the picture is targeted for a March 2, 2012 release, which falls on the birthday of Dr. Seuss, who died in 1991." Zac Efron plays "Ted", the boy in the story, renamed after Dr. Seuss. Taylor Swift plays "Audrey", Ted's girlfriend and a new character named after Seuss' widow, Audrey Geisel, who is the producer of the film, respectively. In the 1970s, DFE Films produced a CBS special called The Lorax 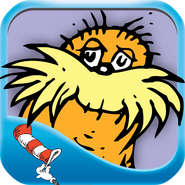