Dr. Seuss Wiki
Register
Don't have an account?
Sign In
Advertisement
in: Wall Destroyers, Movies, The Lorax,
and 9 more

The Lorax is a 2012 American computer-animated 3D musical fantasy comedy film produced by Illumination Entertainment and based on Dr. Seuss' children's book of the same name. The film was released by Universal Pictures on March 2nd 2012, the 108th birthday of Dr. Seuss.

The second adaptation of the book, following the 1972 animated musical television special, the film builds on the book by expanding the story of Ted Wiggins, the previously unnamed boy who visits the Once-ler. The cast includes Danny DeVito as the Lorax, Ed Helms as the Once-ler, and Zac Efron as Ted. New characters introduced in the film are Audrey (voiced by Taylor Swift), Aloysius O'Hare (Rob Riggle), Mrs. Wiggins, Ted's mother (Jenny Slate), and Grammy Norma (Betty White).

The film received mixed reviews from critics and was a box office success, grossing $214 million domestically and $348.8 million worldwide based on a $70 million budget.

Ted Wiggins is an idealistic boy, who lives in "Thneedville", a walled city that, aside from the human citizens, is completely artificial; everything is made of plastic, metal, or synthetics with no living plants. Ted has a crush on a local environmentalist, Audrey, who wants to see a "real tree" more than anything in the world, and decides to find one in order to impress her. His energetic Grammy Norma secretly tells Ted the legend of the Once-ler, who will tell anyone about trees if they brought him fifteen cents, a nail, and a shell of a great-great-great grandfather snail. When Ted leaves Thneedville in search of the Once-ler, he discovers that the outside world is a contaminated, empty wasteland. Once the boy finds him, the Once-ler agrees to tell Ted about the trees on the condition that he listens to the story over multiple visits. Ted agrees, but on his way home, he encounters the mayor of Thneedville, Aloysius O'Hare, who is also the proprietor of a company that sells bottled air to Thneedville residents. O'Hare explains to Ted that because trees produce oxygen free of charge, he considers it a threat to his business whenever he hears people talking about them. After revealing that he has "security camera eyes" all over the city, O'Hare pressures Ted to stay in town. However, Ted continues to sneak out of O'Hare's sight (with his grandmother's encouragement) and learns more of the trees' history.

Over Ted's various visits, the Once-ler recounts the story that when he was a young man, he departed his family to find good material for his Thneed invention and make a business. After stumbling upon a lush Truffula Tree forest valley, the Once-ler meets the guardian of the forest, the Lorax, after cutting down a Truffula Tree. The Lorax urges the Once-ler to leave the forest, but the Once-ler refuses. Eventually, the Once-ler promises not to chop another tree down, and the two seem to begin a friendship of sorts. Then, the young businessman's Thneed invention becomes a major success and the Once-ler's family arrives to participate in the business. At first, keeping his promise, the Once-ler continues Thneed production by harvesting the Truffula Tree tufts in a slow, but sustainable manner. However, his greedy and lazy relatives soon convince him to resume chopping down the trees. Over time, the Once-ler's deforestation spirals into a mass overproduction. Flushed with wealth, the Once-ler rationalizes his short-sighted needs into arrogant self-righteousness, and the Lorax's helpless protests do not stop him. The Once-ler pollutes the sky, river, and landscape until the very last Truffula Tree falls. With no further chance of business, he is left broken and abandoned by his family, with his mother disowning him, and with the region uninhabitable because of his business's pollution, the Lorax sends the animals off to find a new place to live before he departs into the sky, leaving only a stone-cut word: "Unless". Distraught and ruined, the Once-ler became a recluse.

After he finishes telling his story, the Once-ler finally understands the meaning behind the Lorax's last message and gives Ted the last Truffula seed in hopes that he can plant it and make others care about real trees once more. Ted's desire to impress Audrey also becomes a personal mission to remind his town of the importance of nature. O'Hare, still determined not to have trees undermine his business, takes heavy-handed steps such as covering Audrey's nature paintings, closing off the door that Ted uses to see the Once-ler, and forcibly searching Ted's room for the seed. Ted enlists his family and Audrey to help plant the seed, which has begun to germinate after water was accidentally spilled on it. O'Hare and his employees pursue the dissidents until they manage to elude him and reach the town center. When Ted finally attempts to plant the seed, he is interrupted by O'Hare, who rallies the population to stop them by telling the people that trees are dangerous and filthy. To convince them otherwise, Ted takes an earthmover and rams down a section of the city wall to reveal the environmental destruction outside, thereby showing them what O'Hare is encouraging. Horrified at the sight and inspired by Ted's conviction (as though a part of the Lorax is within him), the crowd turns against O'Hare when they discover his true nature, his own henchmen expelling him from the town (by his own jetpack-like helmet), and the seed is finally planted. Time passes and the land starts to recover; new trees sprout, the animals begin to return, and the redeemed, now-mustached Once-ler is happily reunited with the Lorax.

The movie ends with a quote from Dr. Seuss: "Unless someone like you cares a whole awful lot, nothing is going to get better. It's not."

As of March 17, 2012, the film had received a score of 53% Fresh at the review compilation site Rotten Tomatoes, a majority of positive reviews, but just shy of a "Fresh" rating, which requires 60% or greater. The site's consensus of film critics' opinions stated that "Dr. Seuss' The Lorax is cute and funny enough but the moral simplicity of the book gets lost with the zany Hollywood production values.[1] Overall audience reviews were much more favorable, rating the film with a CinemaScore grade of A. As such, the film grossed the biggest U.S. domestic opening weekend to date of 2012 with a total of $70.2 million, enough to make up its production cost in the opening weekend. [2] In its second weekend, The Lorax brought in $38.8 million domestically, pushing the domestic take over the $100 million mark.

Differences from the book

Due to being a feature-length film based on a children's book, it changed several things from the story: 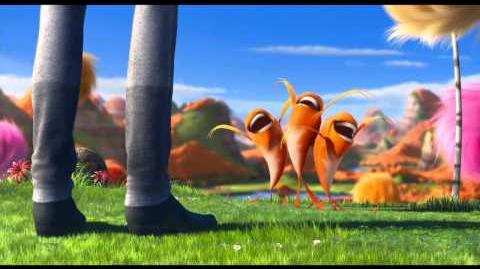 The Lorax - The Once-ler discovers the Truffla forest 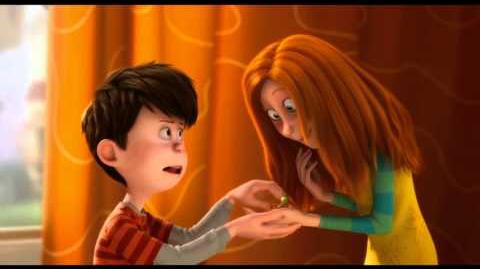 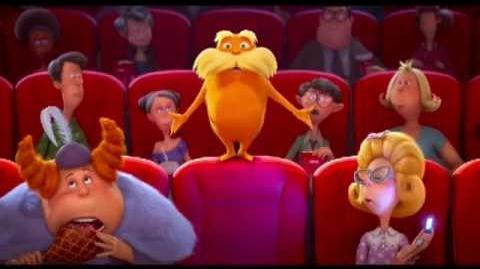 Danny DeVito as the Lorax 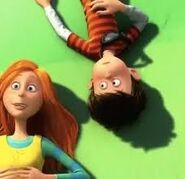 The Lorax and the Young Once-ler

The Once-ler pointing at a Bar-ba-loot.

The lorax after the tree was cut down

Ted with his remote-controlled airplane

Ted at the Once-ler's home

Ted and the last Truffula seed

a Truffula Tree
Community content is available under CC-BY-SA unless otherwise noted.
Advertisement