While the Moose of Lake Winna Bango were all in line going in the forest to find moose moss to eat, The last moose in line named Thidwick, known to be the moose with a kind heart is taken advantage of by opportunist animals who take up residence in his horns under the guise of being 'guests.' The moose undergoes various hardships as a result of these residents, including loss of his hair, his herd, his friends and almost his life by the Ve-Ri-Tas Poachers. Eventually, the moose stands up for himself, rids himself of the unwanted residents by breaking off his antlers, and rejoins his herd. But it is a good thing his antlers always grow back As for his old horn, his guest the "Bingle Bug,Tree-Spider, two Zinn-a-zu Birds, a Wood Pecker 4 squirrels, a Bobcat, a Turtle, a Fox, some Mices, fleas, a big Bear, and sixty two bees" have been all taken out and killed by the Ve-Ri-Tas poachers and were later stuffed and mounted on a pelt as the main hunter's wall still on the horns. 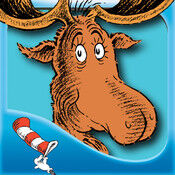 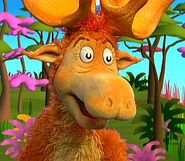 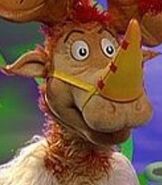 Add a photo to this gallery
Retrieved from "https://seuss.fandom.com/wiki/Thidwick?oldid=43660"
Community content is available under CC-BY-SA unless otherwise noted.