Thidwick the Big-Hearted Moose is a book written by Dr. Seuss. This book was also used for Random House Home Video which entitles "Dr. Seuss Video Classics," which also features "Horton Hears a Who!"

Oceanhouse Media published this book to be used as an app on iPhones, iPod touch, iPad, and android apps.

Thidwick, a moose in a herd numbering approximately 60 who subsist mainly on moose-moss and live on the northern shore of Lake Winna-Bango, grants a small bug's request to ride on his antlers free of charge to Thidwick’s singing voice. The bug takes advantage of the moose's kindness and settles in as a permanent resident, inviting various other animals to live on and in the moose's antlers. The moose acquiesces to the unexpected living arraingements, considering the animals 'guests' even though he never told them explicitly that they were allowed to live there, and the situation quickly gets out of control. When one of the guests - a woodpecker - begins drilling holes in Thidwick's horns, the other moose give Thidwick an ultimatum: Get rid of his guests or leave the herd.

When Thidwick's sense of proper etiquette directs him to forgo the comforts of herd life in favor of being kind to his guests, his herd leaves him. Four Squirrels join in making the holes in the antlers "the wood pecker made" into their homes and a Bobcat and a Turtle are welcomed by the guest on his horns. Thidwick realizes that he could not tell them all to leave or say no, so he had no choice but to stay true to his singing word and look for moose-moss to eat. When winter came, it was no longer easy to find moose-moss, for it gets scarce in the winter time to find. The herd of other Mooses began to swim across the lake to find fresh supplies of moose-moss, but when Thidwick attempts to follow them, his guests strenuously object. The small bug suggests that they all decide this by vote. All to want to leave, "Aye", those who want to stay, "Nay". Thidwick happily agrees and sings "Aye" however his guest were not going to have that and they all shouted, "NAY", and the guest happily celebrate on his horns and even facing starvation, Thidwick refuses to break etiquette, and remains on the cold, northern shore of the lake where his guests prefer to reside. The residents of Thidwick's horns, without regard to the increasing physical or psychological load that the moose has to bear, continue inviting other animals to live with them.

The situation comes to a head when hunters attack Thidwick with the goal of mounting his head on the wall of the Harvard Club. Thidwick attempts to outrun the hunters, but the heavy load, coupled with his guests' unwillingness to travel across the lake, prevents his escape. Just before his imminent capture, however, Thidwick remembers that it is time to shed his antlers and sing his song. He promptly sheds his antlers, makes a snide comment to his former guests, and swims across the lake to rejoin his herd. His former guests are all captured and were killed by the hunters "who were going to go after Thidwick at first" and are now stuffed with cotton and mounted with Thidwick's antlers on the Harvard Club wall. 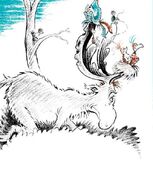 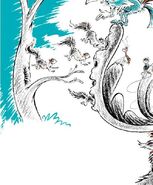 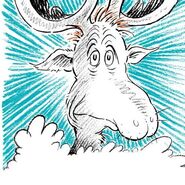 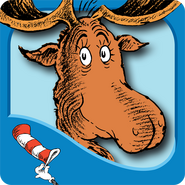 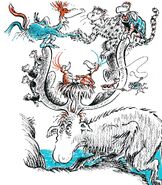