Dr. Seuss Wiki
Register
Don't have an account?
Sign In
Advertisement
in: Dr. Seuss Characters, The Cat in the Hat, Males,
and 5 more

Thing One and Thing Two

Thing One and Thing Two are human-like twins from The Cat in the Hat book. They were released from the box that the cat brought in to introduce to Conrad, Sally, and the fish. The things later caused mischief by recklessly flying kites in the house which bumped the wall and also knocked everything down in their path. Conrad was able to stop the things with a net. They were also taken away by the Cat, who put them back in the box. As of now, they also appear in the TV series The Cat in the Hat Knows a Lot About That!, voiced by Rob Tinkler.

At some point there happens to be a Thing Three and Thing Four if the Cat ever needs extra help.

In the 2003 film, Thing One is played Danielle Chuchran and Taylor Rice, and Thing Two was played by Brittany Oaks and Talia-Lynn Prairie, but Dan Castellaneta provided the voices for both of the two Things. In the deleted scenes of this film, the Things stall Joan Walden from getting home by three methods of a flood.

The Things wear red jumpsuits with the logos 1 and 2, and they have blue afro hair in their other appearances. In the Learning Library, they are wearing blue jumpsuits, their afro hair is blond, and their skin color is peach. 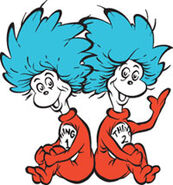 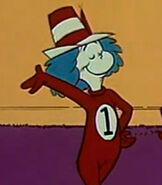 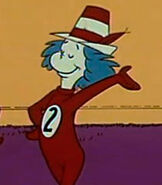 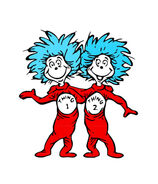 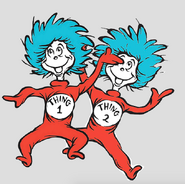 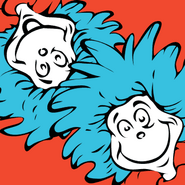 The Things as they appear in 2003's The Cat in the Hat
Community content is available under CC-BY-SA unless otherwise noted.
Advertisement