Vlad Vladikoff is a reclusive purple vulture mercenary who lives in a tree stump in a swamp surrounded by thorns. The Sour Kangaroo hired him to get rid of Horton's clover. At first, he agreed to do it in exchange for her son Rudy, but he then changed his mind and stated a brand new pair of objects never specified beforehand. After "thinking" it over, she used reverse psychology to get him to do it for free. He speaks in a thick Russian accent and is extremely theatrical in his wickedness to the point of embarrassing himself. He is also known as Whizzer McKwoff, as he is referred to in the 1970 Horton Hears a Who! special as this. In The 2005 Version Of Seussical, he was once again as Whizzer McKwoff. He is known as Vlad Vladikoff in Seussical JR. 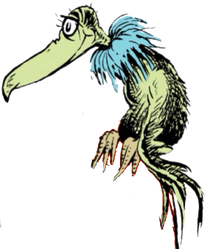 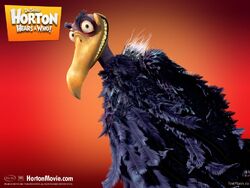 Vlad Vladikoff in the 2008 movie Horton Hears A Who!

Vlad Vlad-i-koff flying through the night darkness with Horton's clover to the 100 miles wide clover field
Add a photo to this gallery
Retrieved from "https://seuss.fandom.com/wiki/Vlad_Vladikoff?oldid=43765"
Community content is available under CC-BY-SA unless otherwise noted.