The Whos are a species of microscopic people of who come in many different sizes, ranging from tall to small. They all live in the equally microscopic world of Whoville. They are an extremely cheerful race who enjoys celebrations such as Christmas, where they celebrate the Whobilation (a big Christmas celebration) and the Who Centennial (A ceremony celebrating 100 years of peace and harmony in Whoville). The Whos and Whoville itself appear in the books Horton Hears a Who! and How the Grinch Stole Christmas! and also in the 1977 television special, Grinch Night.

In the books and cartoons, Whos are notably humans, and apart from their size (which can vary greatly), snouts and button-like noses, would pass as humans easily.

In the Horton Hears a Who film, Whos are furry, have short legs, long arms, a squash-shaped torso, and a decidedly non-human face. Their feet are toeless and pointed, and they have four fingers on each hand. Overall, they bear a resemblance to the Grinch's TV design. They also appear to be slightly elastic, as demonstrated by Mayor McDodd and his son JoJo. Their eye color tends to match the dominant color of their fur.

Whos appear to have an incredible sense of balance, as observed by Whoville's bizarre architecture and JoJo's dexterity, among other things. In Horton Hears a Who they also seem to be incredibly flexible, and durable, surviving the near destruction of their city, with no known casualties.

In Grinch Night, the Whos were designed to look more human than in other appearances, with the exception of their hair (for most of the Whos). They also wear robes with a button on their chests, instead of having their signature colorful fur on their bodies, and they have regular human noses instead of their signature snouts. One Who, Sergeant Samuel McPherson also appears to look almost-entirely human in his design, as his hair is hidden by his helmet.

The most notable Whos within Whoville are its mayor Ned McDodd, who is the first Who to gain contact with the elephant Horton, Dr. Hoovey (whose role in the cartoon is split between Ned and Dr. LaRue), the young and very small Cindy Lou Who, the brave Euchariah Who, who foiled the Grinch on Grinch Night in the cartoon with the same title by overcoming his fears, Ned's wife Sally O'Malley, Dr. Mary Lou Larue, and the once silent JoJo, the mayor's son, who breaks Whoville's sound barrier in the dust speck that allowed the animals in the Jungle of Nool to hear the Whos. 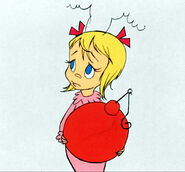 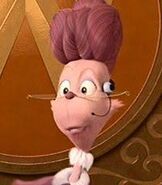 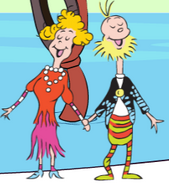