Dr. Seuss Wiki
Register
Don't have an account?
Sign In
Advertisement
in: Dr. Seuss Books, Six by Seuss, Yertle the Turtle and Other Stories

Yertle the Turtle The eponymous story revolves around a Yertle the Turtle, the king of the pond. Unsatisfied with the stone that serves as his throne, he commands the other turtles to stack themselves beneath him so that he can see further and expand his kingdom. However, the stacked turtles are in pain and Mack, the turtle at the very bottom of the pile, is suffering the most. Mack asks Yertle for a respite, but Yertle just tells him to be quiet. Then Yertle decides to expand his kingdom and commands more and more turtles to add to his throne. Mack makes a second request for a respite because the increased weight is now causing extreme pain to the turtles at the bottom of the pile. Again Yertle yells at Mack to be quiet. Then Yertle notices the moon rising above him as the night approaches. Furious that something "dares to be higher than Yertle the King", he decides to call for even more turtles in an attempt to rise above it. However, before he can give the command, Mack decides he has had enough. He burps, which takes away Yertle's throne and tossing the turtle king off the turtle stack into the mud, leaving him "King of the Mud" and freeing the others.

Gertrude McFuzz The second story recounts the tale of the "girl-bird" Gertrude McFuzz, who has a small, plain tail feather and envies Lolla Lee Lou, who has two feathers. She goes to her uncle, Doctor Dake and he tells her where she can find berries that will make her tail grow, and she eats the entire vine, causing her tail to grow to an enormous size. However, the added weight prevents her from flying, running or even walking! Her uncle and many other birds are forced to carry her home and pluck out her tail feathers, which takes a few weeks, causing her to be sore. Though she has only one feather left—as before—she now has "enough, because now she is smarter."

The Big Brag The third and final story tells of a rabbit and a bear, who both boast that they are the "best of the beasts", because of the range of their hearing and smelling abilities, respectively. However, they are humbled by a worm who claims he can see all around the world—right back to his own hill, where he sees the rabbit and bear, whom he calls "the two biggest fools that have ever been seen"

This book along with The Big Brag and Gertrude McFuzz have been feature in a video series from Random House's Dr. Seuss Video Classics

Horton Hears a Who - by Dr. Seuss
The Treasury Classics(Yertle the Turtle/Gertrude McFuzz/The Big Brag 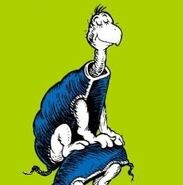 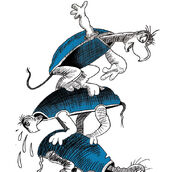 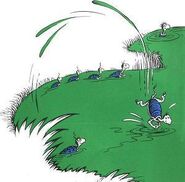